A bird's-eye view of northbound traffic on the Asian Highway in Chai Nat province on Friday morning. (Photo by Chudate Seehawong)

Severe traffic congestion was reported on Friday on many main routes to key provinces as the New Year holiday exodus began.

In Chai Nat, a section of Highway No.32, which is part of the Asian Highway and serves as a major link to the North, received a large number of cars from Thursday night until yesterday morning.

Traffic was jammed and vehicles filled all outbound lanes of the highway forming a long line stretching more than three kilometres. Accidents involving 20 cars were reported with no casualties on the road.

In the early morning yesterday, traffic flowed smoothly on Highway No.340, linking Suphan Buri with Chai Nat. Authorities suggested motorists on nearby roads with heavy traffic divert to the highway.

In Ayutthaya, Pol Col Sombat Chuchaiya, a deputy chief of the provincial police, said Phahon Yothin Road near Pratu Nam Phra-in market in Wang Noi district was congested at times while a 20km section of the road that connects to the Bang Pa-in ring road experienced sluggish traffic.

The Phahon Yothin Road serves as the main route leading to the North.

On Highway No.304 between Kabin Buri district of Prachin Buri and Nakhon Ratchasima, vehicles were slowly moving along amid heavy traffic. The highway is mostly used by motorists from eastern provinces heading up to the lower Northeast.

Highway police in Prachin Buri said they were prepared to deal with the New Year mass exodus. They had asked for cooperation from operators of large lorries to avoid using the highway during the New Year's peak travelling days.

No heavy congestion was seen on Highway No.24, from Nakhon Ratchasima to Ubon Ratchathani, which serves as a main connection to provinces in the lower Northeast such as Buri Ram, Surin and Si Sa Ket.

Meanwhile, figures reported by the State Railway of Thailand showed a large number of people had begun their weekend journey to the provinces.

The SRT has estimated that throughout the holidays about 110,000 people will travel by train each day.

Col Sirichan Ngathong, deputy spokeswoman of the National Council for Peace and Order, said a total of 788 drink-driving incidents nationwide were recorded. Six cars were seized as a result of drink driving on Thursday. 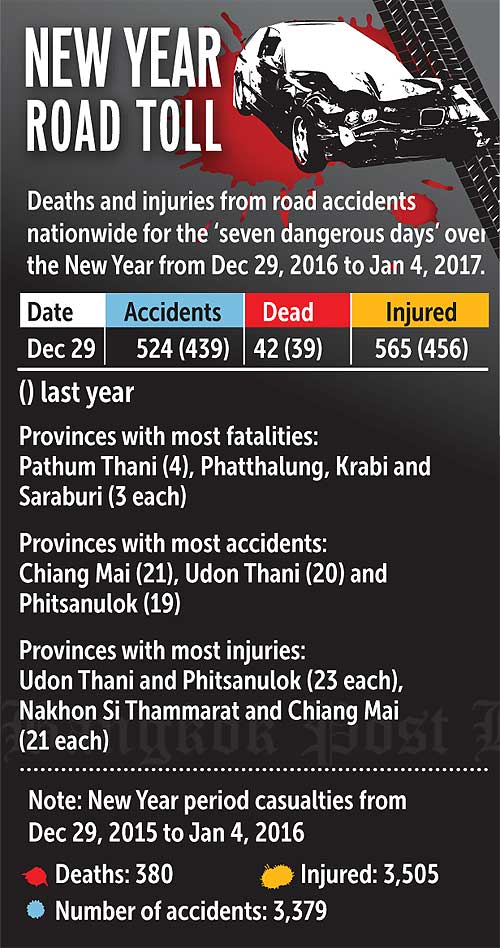