A foreign woman is taken to a hospital on Koh Phangan after sustaining injuries from swimming during high waves in the early hours of Sunday. (Photo by Supapong Chaolan)

SURAT THANI - A Canadian man drowned and another foreign woman sustained injuries after ignoring a ban on swimming in high waves during the New Year countdown on Koh Phangnan in this tourist province.

The two tourists were retrieved from the sea at Hat Rin beach in Koh Phangan district, but one of them died in the early hours of Sunday, said police.

The dead tourist was a 26-year-old Canadian, whose name was withheld pending notification of relatives. The injured victim was a foreign woman whose nationality was not yet known. She was sent to Koh Phangan Hospital.

The drowning was reported during the New Year countdown event, joined by over 20,000 Thai and foreign visitors. Over 100 police and bomb disposal officers were deployed to beef up security at the venue.

During the celebrations, there were high waves. Authorities have banned swimming during this period due to strong wind waves. However, some groups of foreigners ignored the warning sign. 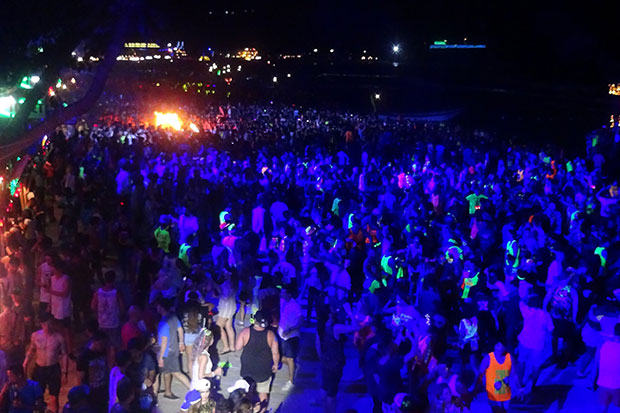 More than 20,000 local and foreign visitors join the New Year countdown at Hat Rin beach on Koh Phangan in Surat Thani. Some groups of tourists reportedly ignored a ban on swimming in high waves during the celebrations and one drowned. (Photo by Supapong Chaolan)