As violence increases again in the deep South, the government is reluctant to commit to peace talks. (File photo)

This year, despite government efforts to address the problems, familiar issues of the deep South are likely to recur -- hierarchical duplication among agencies, megaphone diplomacy, and continued violence.

Violence in the four southern border provinces -- Pattani, Narathiwat, Yala and Songkhla -- has intensified even though the country is run by a military-led government. Over the past year, there were 807 violent attacks in the provinces which claimed 307 lives and left 628 injured.

Prime Minister Prayut Chan-o-cha and his government decided late last year to appoint a special delegation, known as the front command cabinet, chaired by Deputy Defence Minister Gen Udomdej Sitabutr in the hope it can address the root problems.

The delegation also has the authority to manage state budgets allocated to the far South and has formulated a roadmap to address violence in the far South.

Meanwhile, peace talks between authorities and insurgent groups under the umbrella of the so-called Mara Patani will continue. "Yes, I've heard about the news [the peace talks and special delegation]. I'm not sure how it helps. We have lots of checkpoints, lots of peace talks but attacks are still taking place. The media just doesn't report it if there aren't big casualties," said Pawin Nilsuwan.

His parents, one of a dozen Buddhist families living in a Malay Muslim-dominant village, were shot and immolated and their house partly burnt while their Buddhist neighbours -- a mother and a son -- were also killed. No perpetrators were arrested and the case remains unsolved today after nearly two years. Siblings of the two families have tried to sell their land and move out of the area but there are no buyers. Mr Pawin, however, decided to move and live in Bangkok. 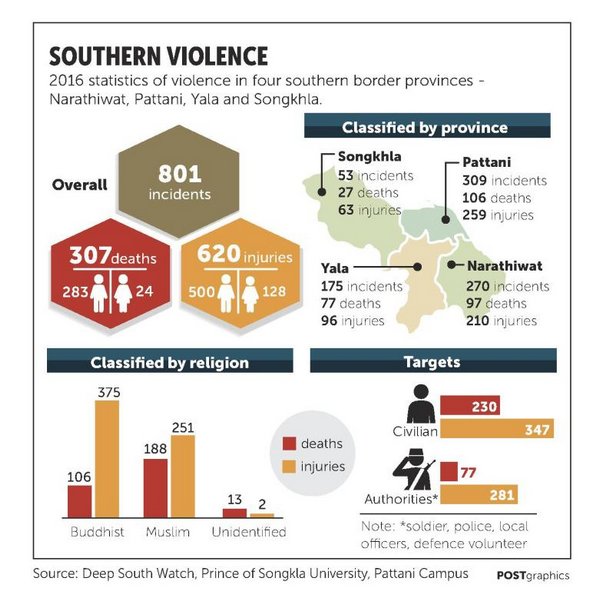 The Prayut government has restructured entities to address the southern insurgency that has claimed about 7,000 lives since violence broke out 13 years ago. Gen Prayut's Order No. 230/2014 laid down a policy to repackage the peace talks, which were launched in February 2013 under the Yingluck Shinawatra government.

However, both parties have different demands. The government has demanded that Mara Patani guarantee safety zones and locally-aspired development while Mara Patani has asked the government to declare peace talks as a national agenda item and recognise the group as a sole dialogue partner and provide an assurance of immunity that their members would not prosecuted.

Mara Patani spokesman Abu Hafiz said the group has to wait for Malaysia, which hosts the talks, to set the date of a full-panel meeting.

"We've listened to people at the ground level. That's why we agreed to talk about safety zones. But we're still at the confidence-building stage," said Mr Abu Hafiz, adding certain prerequisites need to be in place first before the talks can start properly.

Observers, however, believe the talks will drag on without a substantive agreement as the government, which has just a year in office left before the next polls, is expected to proceed cautiously and does not want to fully commit in the talks.

"After all, we all know the government is moving cautiously. They have more or less one year to go, they don't want to fully commit in talks with the other side. Thus, same old issue -- securing safe zones -- can't be finalised yet," a source said.

The government has also initiated a "triangle" city model to turn three districts in the far South -- Sungai Kolok of Narathiwat, Betong of Yala and Nong Chik of Pattani -- into models of sustainable development in terms of both the economy and security.

At least 5.1 billion baht was set aside for funding all associated projects in the three districts.

Yet certain military and intelligence officers are skeptical about the addition of "more bureaucratic layers", and doubt they will bring about solutions. "It looks like image building, showing this government is upbeat in solving the problem," said a military source referring to the special delegation. "Some 165 billion baht was spent from 2004 until 2016; the economic value of the southern solution cost has yet to be weighed."

Observers noted the 4th Army may not be happy with the special delegation as "so many shadows hover over its territory".

While the 4th Army commander has the army chief as the boss in the line of command, Gen Udomdej and Gen Akkara Kerdphol, the government's head representative at the peace talks, has the prime minister as a direct boss. Deputy Prime Minister Gen Prawit Wongsuwon, who oversees security affairs, has also been involved in the loop of communications.

"We are abiding by the National Council for Peace and Order's order No. 98 to adopt a three-pronged strategy: Upholding the rule of law, enhanced military moves, and expanded political engagement. We are preparing the region for the final stage of creating a sustainable peace," Col Pramot said.

About 8,000 soldiers who came from regional military bases other than the far South have been pulled out since last October. "The front command cabinet role is to oversee the smooth integration of the roadmap," he said.

Muhammad Ayub Pathan, chair of the Civil Society Council of Southernmost Provinces, said he was optimistic about the roadmap and the new structure. "If the three nodes, namely policy measures on talks, the field operations [Isoc's 4th Region Command] and the front command cabinet could be integrated, we will be hopeful," Mr Ayub said.

He noted that both the government and the Mara Patani have to work with civil society, and vice versa.

"We must put forward proposals to state and non-state actors. It's a good sign that Mara Patani has taken into account women's demands on the safety zones agenda," Mr Ayub said.