Rescue workers inspect the two burned vehicles after a crash on Road 344 in Ban Bung district in Chonburi on Monday. (EPA photo)

Twenty-five people, including a three-year-old boy, were killed when a van collided with a pickup truck and caught fire on a highway in Ban Bung district, Chon Buri province, on Monday afternoon. 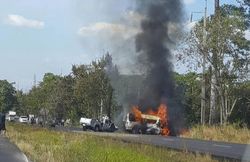 A picture of the accident taken from the opposite traffic. (Facebook/ลุงเก่ง ใจดี)

An eastbound pickup truck heading for Klaeng district in Rayong with 12 passengers in the cab and the open cargo area crashed into a van coming in the opposition direction on Road 344 in Ban Bung district, causing fires on the two vehicles, a rescue worker of Sillatham Ban Bueng Foundation told Jor Sor 100.

The public van was taking 15 passengers from Chanthaburi to Bangkok when the accident took place at around 2pm.

The rescue worker said 11 people in the truck and 14 people in the van, including the three-year-old boy, died. Traffic police also confirmed the same figures in a tweet.

The two survivors -- one from each vehicle -- were sent to Ban Bung Hospital.

Pol Lt Worawit Wannanuwas, a deputy superintendent of Ban Bung police station, told Jor Sor 100 that the van driver might have lost control of the vehicle, which crossed a dividing road ditch to the other side and hit the truck. The blast might have been caused by the compressed natural gas cylinder in the van, he added.

Rescuers already put out the fires engulfing the two vehicles.

The clash claimed the most lives in a single incident during the 2017 New Year holidays. The government started the road safety campaign on Thursday and 280 people died in road accidents as of Sunday.