Rescue workers inspect the wreckage of a pickup truck after it collided with a passenger van in Chon Buri province on Monday. Twenty-five people were killed. (EPA photo)

The accumulated death toll of road accidents during the New Year's holidays shot up to 367 on the fifth day of the road safety campaign.

On Monday, there were 445 accidents in which 87 died and 465 injured, assistant police chief Pol Lt Gen Witthaya Prayongphan said on Tuesday.

The figures brought the numbers of accumulated deaths and injuries over the past five days to 367 and 3,342 respectively, involving 3,157 accidents nationwide. 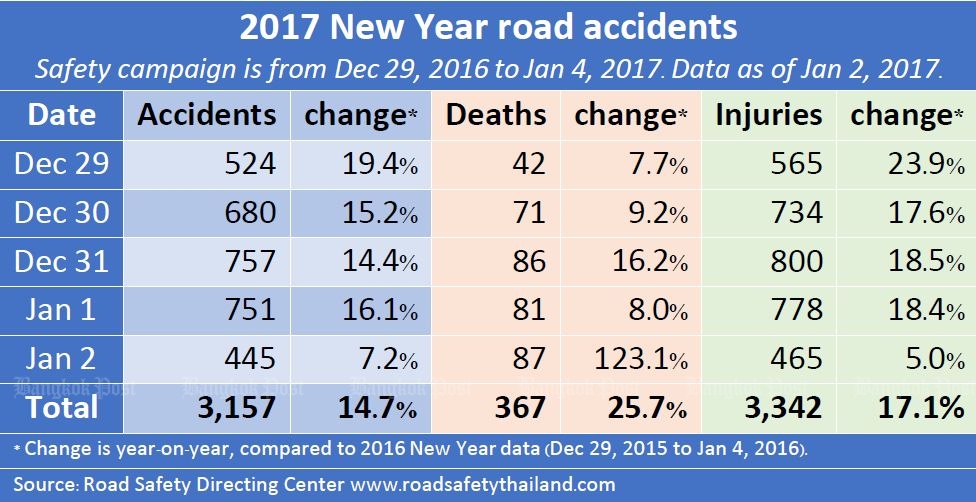 Like on previous days, the major causes of the accidents on Monday were drink driving (37.5%) and speeding (33%). Motorcycles were involved in the most accidents (84%). Most accidents occurred on open roads (65%) and roads in tambons (37%), Pol Lt Gen Witthaya said.

The time of the day most prone to accidents was between 4pm and 8pm (30%) and most of the dead and injured were in the working age (47%).

Udon Thani in the Northeast reported the most accidents (25) and the most injuries (23). Not surprisingly, the province with the highest fatalities on Monday was Chon Buri, where 25 were killed in a single accident.

Chiang Mai in the North reported the most accumulated accidents (129) and injuries (137).

Calling on the red shirts: Pheu Thai needs you to beat the dope vote!