Back to work after record highway death toll
Thailand
General

Back to work after record highway death toll

Passengers disembark from a train at Bangok's Hua Lamphong station Tuesday as the four-day holiday weekend draws to a close. (Photo by Wichan Charoenkiatpakul)

New Year revellers flowed back to Bangkok Tuesday after the long break, with more than 100,000 people travelling on trains from their upcountry provinces alone.

At Hua Lamphong railway station, State Railway of Thailand (SRT) officials said they were braced for 110,000 passengers arriving from upcountry during the day.

Travellers' numbers rose rapidly Tuesday morning when trains, especially from Chiang Mai, Ubon Ratchathani and Udon Thani provinces arrived, adding to the bustling atmosphere at the station where some people were still seen queuing up to buy tickets to travel upcountry.

Yet the in-bound routes were more crowded as another batch of about 100,000 train passengers is expected to arrive at the station Wednesday, the officials said.

They are among more than 580,000 people who have travelled by train over the holidays from Dec 28 until Tuesday, according to the SRT.

But it was on the nation's highways where people died at the record rate of three per hour during the holidays.

Officials were seen inspecting vehicles Tuesday to make sure they could take passengers safely back to Bangkok. The problem proved to be faulty drivers. 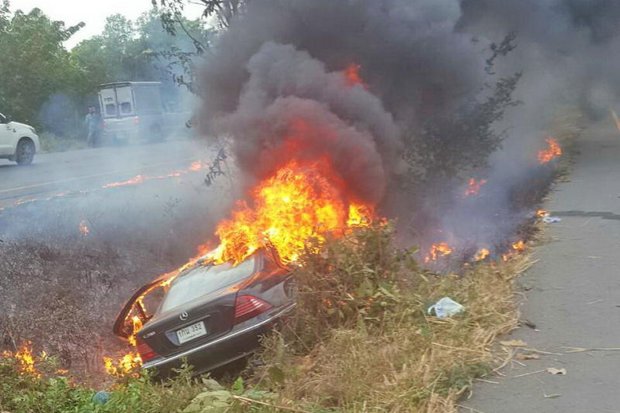 Three elderly people were trapped and burnt to death when their Mercedes-Benz plunged off Highway 34 in Chachoengsao province Tuesday. (Post Today photo)

The driver of the van involved in Monday's horrific crash and explosion in Chon Buri which left 25 dead was likely to have dozed off behind the wheel, an initial investigation showed.

He had made five round trips of 500 kilometres within 31 hours, according to officials. 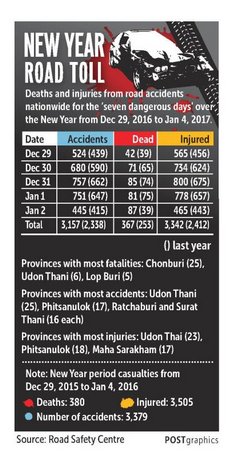 The van was heading from Chanthaburi to Bangkok when it swerved out of its lane and crashed into a pickup truck travelling in the opposite direction on a highway in Chon Buri's Ban Bung district.

An explosion triggered a fire in the van, where 14 out of 15 people on board died, including the driver.

The collision also killed 11 of the 12 people in the pickup.

Officials pleaded with motorists to observe traffic rules and show nam chai, or kindness, while driving to help prevent accidents.

Phetkasem Road, which links 14 provinces in the South with Bangkok, was particularly busy as thousands of travellers made their way back to the capital.

Many people appeared in a rush as they headed back to Bangkok, driving at speed.

He advised motorists to overtake with caution and try to keep their tempers under control.

Permanent secretary for public health Sopon Mekthon also warned motorists to take a break every two hours or 150 kilometres even if they do not feel tired.

Meanwhile, as holidaymakers who travelled back from the northern and northeastern provinces arrived at Bangkok's Mor Chit bus terminal, space was at a premium.

Many were seen carrying large bags of rice from their farms.

Transport officials at the station said there were not enough taxis for the large number of passengers Tuesday.

Traffic at the station was congested, which added to busy roads observed elsewhere in the city as travellers made their way home.