Authorities collect additional evidence from one of the elephant carcasses found to have not decomposed completely at Hua Hin's elephant village on Thursday. (Photos by Chaiwat Satyaem)

Wildlife experts expect to know within two weeks whether the remains of five elephants found buried at Hua Hin's elephant village were illegally captured in the wild, but in the meantime are still trying to trace the village's owner.

DNA testing of the remains found in four undocumented graves is now underway, officials of the Phaya Sua Task Force said on Thursday.

The task force, which tracks illegal wildlife traffickers, on Wednesday discovered the skeletal remains of four adult elephants and a calf on a property behind Wat I-Ti Sook To on Hua Hin-Nongplub Road, about 2.5 km from Hua Hun Market.

The temple had leased the land to Moo Baan Chang, the city’s first elephant village, which opened in 2000.

Thanya Netithammakul, head of the Department of National Parks, Wildlife and Plant Conservation, said Thursday the remains were likely to have been buried for less than two years. One of the elephant carcasses was covered by monk’s robe and was not completely decomposed.

Mr Thanya said there was a heavy smell of anaesthesia at the pits. It led task force officials to believe that wildlife poachers had tranquilised wild elephants in the Western forest complex to capture and merge them with domestic populations or dissect them for body parts. Some may have died from an overdose of tranquilising agents. (continued below) 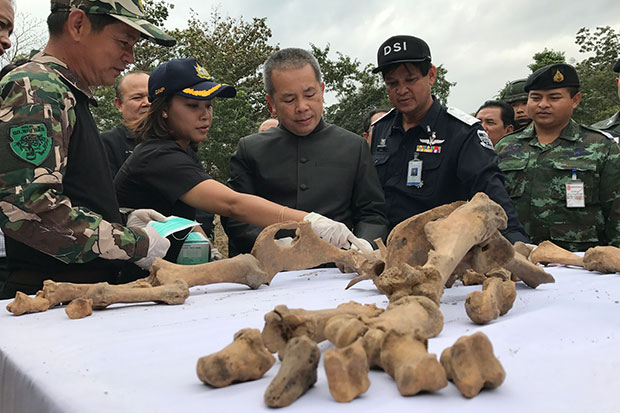 Thanya Netithammakul, head of the National Parks Department (middle), and other officials inspect some of the elephant bones.

Mr Thanya said the task force received a tip-off about dead wild elephants being buried at Moo Baan Chang on Dec 15. Officials hunted down witnesses who lead them to the burial site.

“We will work as quickly as we can in conducting DNA tests on all the unearthed elephants. The process is expected to take about two weeks.”

Mr Thanya, who set up the Phaya Sua Task Force, said since May last year it had seized six elephants from Hua Hin Zoo, Moo Baan Chang in Hua Hin and Moo Baan Chang in Ratchaburi province. The elephants and the three attractions are owned by a 52-year-old businessman and former tourist guide, Prakorb Chamnarnkij.

The only people in the house were the caretaker and her child, but Mr Prakob's lawyer, who witnessed the search, was ordered to call the businessman. He could not reach him, and Mr Prakob’s whereabouts remain unknown as of Thursday evening.

The Department of Special Investigation is looking into the evidence collected by the task force to see if there are grounds to treat it as a special case. 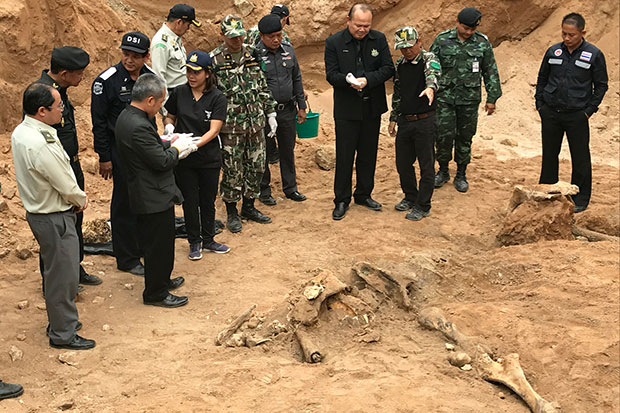 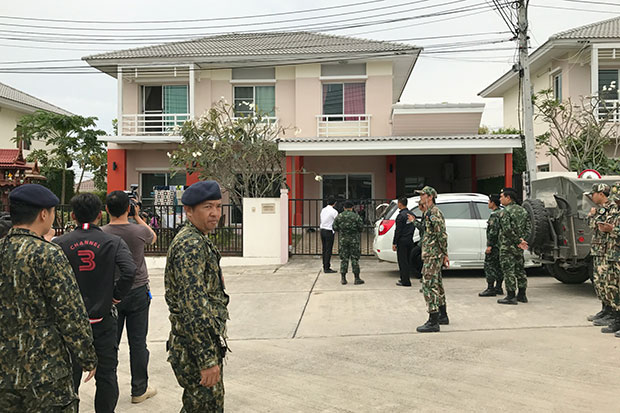 Security officers arrive at the home of Prakorb Chamnarnkij, owner of Hua Hin's elephant village, to conduct a search. They have been unable to track down the businessman

SYDNEY - Facebook on Friday restored access to news for its Australian users after reaching agreement with the government on a landmark law requiring it and other tech firms to pay for journalistic content.