This pulley line with a basket to carry people and supplies was erected across a flooded canal after the bridge was washed away in Nop Phi Tam district of Nakhon Si Thammarat on Thursday afternoon. (Photo by Nujaree Raekrun)

The flood water was 1-2 metres deep in places.

On Friday morning, Ratchadamnern, Karome and Pattanakan Khukhwang roads in the Nakhon Si Thammarat municipal area were under 20 to 50 centimetres of water.

Along Karome Road, vendors were forced to climb on the road median to sell their farm produce.

The Nakhon Si Thammarat airport has declared closed on today and will remain closed tomorrow due to the flooding on its runway.

In Cha-uat district, defence volunteers and military and police personnel had been mobilised to evacuate people from flooded areas to high grounds. Electrical supplies to some areas had been cut to prevent electrocution.

Lt Gen Suchaya Chuwong, commander of the 5th Signal Battalion of the 4th Army, said about 300 people had been evacuated to Cha-uat  Hospital, 150 to the railway station and many small groups to nearby temples.

Phra Arayanan Anantho, the abbot of Wat Khao Phra Thong, said the flood in Cha-uat was the worst in several decades. Since the temple is in a high area and remains totally flood free, people can take temporary shelter there.

He said a large mess hall would be set up to prepare food for all evacuees.

According to the weather office the northeast monsoon still covers the South and the Gulf of Thailand while a low pressure wedge is moving slowly from the Andaman Sea toward Myanmar. Rain and isolated heavy rain is expected in Phetchaburi, Prachuap Khiri Khan, Chumphon, Surat Thani, Nakhon Si Thammarat, Phatthalung, Ranong, Phangnga, Phuket and Krabi provinces.

The rain in the South is expected to ease off on Saturday. 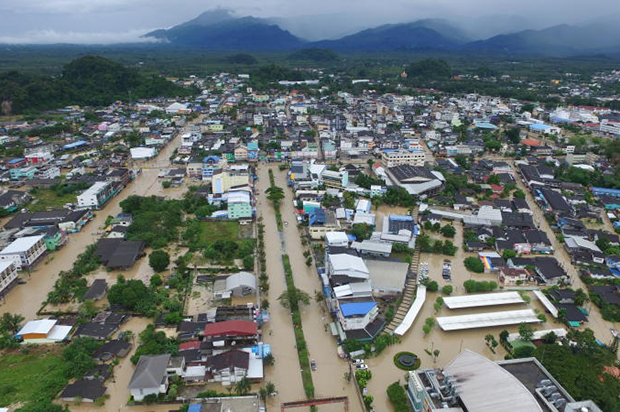