Phetkasem Road in Prachuap Khiri Khan, the only main highway to the South, is submerged with some vehicles stranded in rising floodwater. (Photo by Sunthorn Pongpao)

His Majesty the King has expressed concern over the plight of people in the flood-ravaged South and the difficulty entailed in helping them.

His concerns were passed on to Prime Minister Prayut Chan-o-cha via a group of privy councillors who met the premier at Government House Monday.

Deputy Prime Minister Wissanu Krea-ngam said the King was worried that although rice has been delivered to the affected residents, they would be unable to cook it without water and electricity.

If they are given money, they would not be able to find anywhere to buy their necessities, the deputy premier noted.

Mr Wissanu said the King was also concerned about how to reach the flood-affected residents to deliver food to them as the accessibility of each flooded area varies. 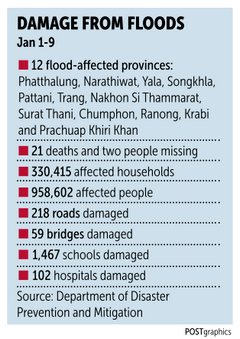 Gen Prayut said the South is facing critical flooding after experiencing the highest level of rainfall in 30 years, adding that after the floods subside, the government will take every measure to solve the drainage problem and boost the flow of water into the sea.

The King's message came while assistance and aid nationwide are being mobilised for the hard-hit South.

The Education Ministry will send 7,500 vocational teachers and students as volunteers to help repair vehicles and electrical appliances in flood-hit provinces.

Under the plan, all volunteers will be divided into 300 teams and will work under the disaster solutions command centre in Surat Thani province.

The groups will work for eight days across the eight provinces starting from Saturday.

"We have set a target to fix about 400,000 damaged items during the eight days," ML Panadda said.

Authorities are expediting efforts to push out floodwater in Nakhon Si Thammarat as a massive volume of floodwater is expected to hit Muang district tomorrow.

The Royal Irrigation Department (RID) was instructed to lay out plans to boost the drainage of floodwater in several districts of Nakhon Si Thammarat to the sea, said Agriculture Minister Chatchai Sarikulya.

Another 30-40 water pumps will be positioned to drain the water and their installation was expected to be completed by Monday, Gen Chatchai said.

According to Gen Chatchai, the largest volume of water would reach Muang district on Wednesday before it flows out to sea via Pak Phanang district. The water is coming from Surat Thani's Khian Sa district.

The RID will work with provincial authorities to make sure Muang district will not be seriously affected by the floods, Gen Chatchai said, adding almost one million rai of farmland in the province has been swamped.

Meanwhile, the navy has sent 30 water-propelling boats to Hua Sai district and another 20 to Pak Phanang to accelerate the flow of floodwater to sea. Provincial authorities requested 40 more to be positioned at the estuary in Muang district.

The navy also dispatched mobile medical teams to take care of flood victims, while helicopters are on standby to evacuate patients who need urgent help.

The outbound lane leading to the South was briefly closed Monday, causing traffic to be jammed for several kilometres. Only large vehicles were later allowed to pass the route.

In Bang Saphan district of Prachuap Khiri Khan, Bangsaphan Hospital staff have been racing against time to erect sandbags to fend off rising floodwaters.

All medical equipment inside the hospital was moved to higher floors to keep it from being destroyed by the flood.