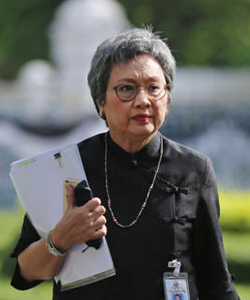 Apriadi: No impact to shrimp export from Thailand

The announcement by Australian Department of Agriculture and Water Resources was issued under the Biosecurity Act.

Ms Apiradi said the ban followed the detection of white spot syndrome virus (WSSV) in farm and wild prawns in the south of the state of Queensland since early December 2016. This disease had not been detected previously in Australia.

She said that according to the Thai Frozen Foods Association and Thai Shrimp Association, the ban will have little impact because Thailand exports mostly cooked shrimp to Australia, at around 10,000 tonnes a year.

White spot disease is indigenous to Thailand, occurring during the change of seasons and found generally in the South.

Ms Apiradi said a representative of the National Bureau of Agricultural Commodity and Food Standards will discuss the issue with Australia, to ensure the lifting of the ban, such as it affects Thailand, as soon as possible.

The announcement states, "The suspension will remain in place until the Australian Government is satisfied that the risk associated with imported prawns is managed to an acceptably low level."

Thailand exported processed shrimp worth US$31.06 million to Australia over the first 11 months of 2016,  up 15.04% year-on-year. Australia is the fifth largest market for Thai shrimp after the US, Japan, Vietnam and Canada.

She said the ministry would closely monitor the situation. Although Australia was not a large market, it was a high-value market with strict quality standards. The ability of Thailand to export to this market was a mark of confidence for sales on the global market.