Flood death toll at 40, more rain on the way

Rescue volunteers help clear a local road in Bang Saphan district of Prachuap Khiri Khan, where landslides cut off access to three villages on the Myanmar border, resulting in food and water shortages for five days. (Photo by Chaiwat Satyaem)

Forty people have died so far as a result of the floods that have ravaged 12 southern provinces since Jan 1, and forecasters say more rain is on the way starting on Monday.

"People should beware of severe conditions and possible flash floods," it said on its website on Saturday. "Areas prone to landslides are still subject to caution, and people should closely follow weather updates."

Nakhon Si Thammarat province has recorded the highest number of deaths, 11, from the unseasonal and catastrophic weather that cut off roads and railways throughout the South. High water also forced the closure of the airport in Nakhon Si Thammarat from Jan 6-13.

Chatchai Promlert, head of the Disaster Prevention and Mitigation Departmen, said on Saturday that floods and runoff, triggered by days of heavy downpours, had affected 1.6 million people from 522,330 households.

Forty people have been confirmed killed as a rsult of the floods, which also damaged 20 government installations, 1,135 roads and 191 bridges.

However, in the seven other provinces, a total of 2,070 villages in 40 districts remain inundated.

Royal Irrigation Department chief Sanchai Ketvorachai said the department had been placed on full alert for a possible new round of flooding from Monday to Wednesday.

As well, he said, the department was ready with backhoes, more water pumps and flood drainage equipment.

In Prachuap Khiri Khan, rescuers and border patrol police on Saturday were helpng to clear roads in three villages in Bang Saphan district near the Myanmar border. 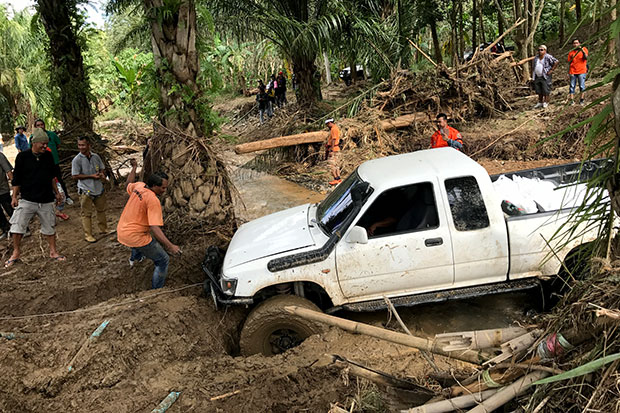 A pickup truck loaded with necessities enters one of three border villages in Bang Saphan district of Prachuap Khiri Khan after a blocked road was cleared. (Photo by Chaiwat Satyaem) 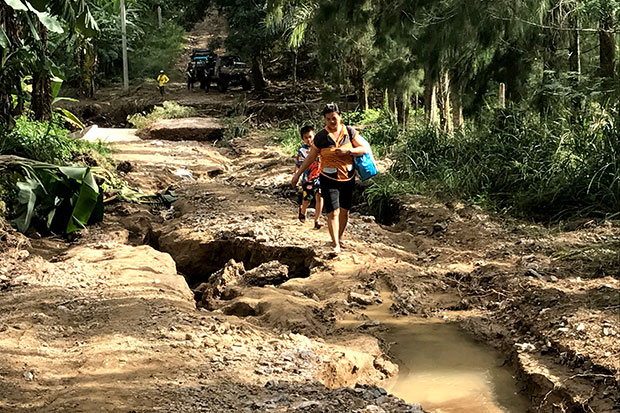 A woman and a boy walk along a damaged road in their village in Bang Saphan district of Prachuap Khiri Khan after runoff from the Tanaosri mountain range and landslides hit their community. (Photo by Chaiwat Satyaem)