His Majesty the King has reiterated the importance of children, urging the government to enhance the education system as a key part of the country's development, Prime Minister Prayut Chan-o-cha said on Saturday. 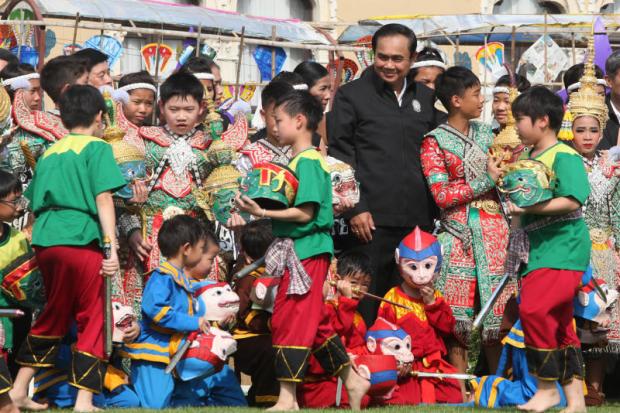 PREMIER PASSIONS: Prime Minister Prayut Chan-o-cha is surrounded by children in costumes who put on performances on Children's Day at Government House on Saturday.

The prime minister was speaking at the opening ceremony of the event to mark National Children's Day in front of the Thai Khu Fa Building in the compound of Government House yesterday morning.

"His Majesty the King told me many times to give priority to children both in terms of education and the country's development. He also wants the government to enhance the discipline of Thai children, which will result in orderliness and knowledge development of Thai people," Gen Prayut said.

The premier said the government is focusing on Thailand's education system, which will be developed along with the economy as both will enhance Thailand 4.0, which lays out development plans for digital infrastructure.

The younger generations are required to broaden their horizons by seeking further knowledge in a bid to advance their potential as well as raise their awareness of moral and ethical issues.

Such valuable knowledge and experiences can be instilled into young children, starting with the family.

Gen Prayut said education will affect the country's development in the next 20 years as Thailand could become a failed state if it had inefficient human resources.

"During the rest of my term in office, I want all Thais to do good to follow in the footsteps of the late monarch, who was always concerned about his people," he added.

The highlight was a tour of the Thai Khu Fa Building in which children were allowed to visit the prime minister's office and sit on his chair.

Participants also received gifts including dolls, key rings and VCDs of Mahajanaka, an animation based on the late king's storybook about perseverance, Buddhist doctrines and a pre-incarnation of the Buddha.

Chawanwit Boonmee, a nine-year-old from Chumphon who was the first child allowed to sit in the premier's chair, said he was excited to experience this moment and would like to be defence minister when he grows up.

Chuk Samet Pier was packed with more than 10,000 children and their parents who were allowed to board HTMS Chakri Naruebet during a Children's Day event at Sattahip Naval Base in Chon Buri.