One of the tranquilised wild elephants is prodded and pulled toward a large truck, which then carried him to Bang Lang National Park in Betong district of Yala, where he was released, in Narathiwat province on Monday. (Photo by Waedao Harai)

NARATHIWAT -- Two wild elephants that have been raiding village crops for 5 months were finally moved to a national park in an 11 hour operation overnight involving 500 people.

The villagers were joined by soldiers, administrators, park rangers, police and veterinarians. Late Sunday they began patiently herding the elephants from a fruit farm where they had been located in Ban Buenae Nakor, in tambon Tamayung of Si Sakhon district, to a local road where two large trucks were parked, waiting.

The animals were then tranquilised, their legs secured with thick ropes, and forced to board the vehicles, with people pulling the ropes and others poking them with sharpened bamboo poles, said Manit Nooyim, local director of national parks, wildlife and plant conservation.

The two elephants were taken to Bang Lang National Park in Betong district of Yala, about 30 kilometres away. Officials hope the presence of abundant wild food and steep, forested hills will keep the elephants from returning to again feast on the villagers' crops.

The elephants had been foraging for food on farms in parts of Rueso and Si Sakhon districts, Narathiwat, for five months and destroyed about 200 rai of crops - in addition to scaring away residents trying to tend their fields. 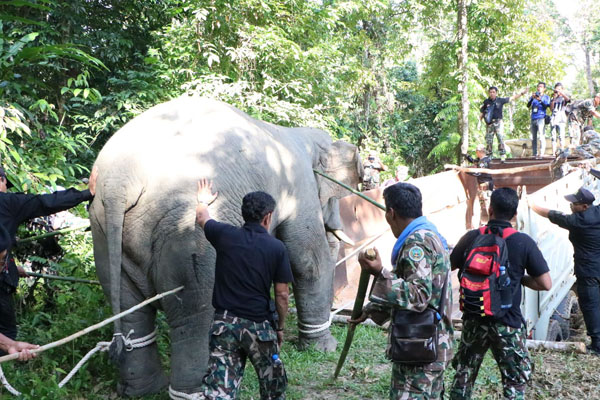 One of the tethered elephants is firmly coaxed onto a waiting truck bed in Si Sakhon district, Narathiwat. (Photo by Waedao Harai)