Deer forage for food at the Tiger Temple on Thursday before being moved to a wildlife centre. (Photo by Pattanapong Hirunard)

KANCHANABURI - Officials from the Department of National Parks, Wildlife and Plant Conservation and other agencies have begun to relocate a number of protected animals from Wat Pa Luangta Maha Bua Yanasampanno, also known as the Tiger Temple, in Sai Yok district.

The animals had been placed in the care of the temple since 2001.

The temple was once a well-known tourist attraction because of its large collection of tigers. However, it was later accused of animal abuse and illegal tiger trafficking, leading to the relocation of the big cats. But other animals were left behind.

The animals remaining at the temple are la-ong lamang (Eld's deer), keng (barking deer) and other deer species. They all are to be removed to wild animal breeding centres at Khao Kho in Phetchabun and Huay Kha Khaeng in Uthai Thani.

Yanyong Lekhawichit, director of the 3rd Conservation Administration Office based in Ban Pong, Ratchaburi, who was in charge of removing the animals, said 36 Eld's deer were expected to be removed from the temple on Thursday.

He said four barking deer and 83 other deer would be removed later.

The removal of the animals was expected to be completed within a week, he said. 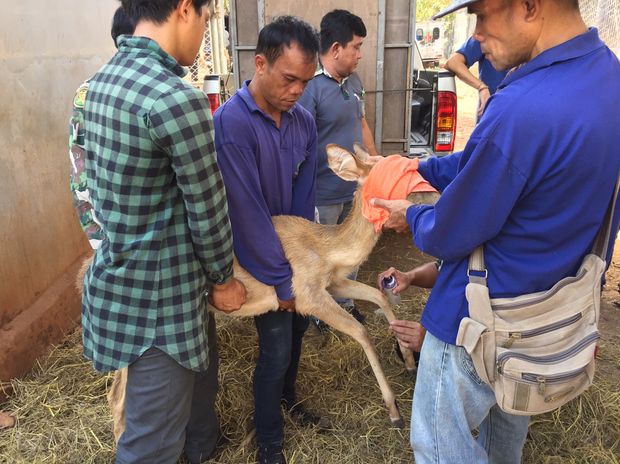 A deer is held while its blood is drawn before being moved to a wildlife centre on Thursday. (Photo by Piyarach Chongcharoen)