A chart showing the network of alleged Lao methamphetamine kingpin Xaysana Keopimpha on display at a press briefing at the Office of the Narcotics Control Board on Friday. (Photo by Patipat Janthong)

Police are hunting five associates of an alleged Lao drug baron who was arrested on Thursday after having evaded police for five years.

The elusive Xaysana Keopimpha was finally apprehended at Suvarnabhumi airport after arriving on a flight from Phuket.

Police said five other members of his gang were still at large but being hunted, and the seizure of assets accumulated from the drug trade continues. 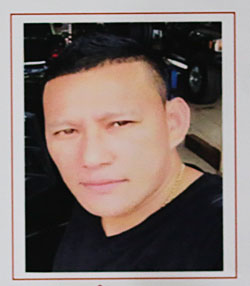 "Mr Xaysana is the big fish of this network," he said. The alleged drug leader and his associates operated hotels, sawmills and luxury car dealerships in Laos as their cover, he added.

Money from the methamphetamine, or ya ba, the gang dealt in was kept in Khammouane province in Laos, acording to deputy national police chief Chalermkiat Sriworakan.

Sirinya Sitdhichai, secretary-general of the Office of the Narcotics Control Board (ONCB), said they had arrest warrants for five other suspects - four Thais and one Lao national -- all associates of Mr Xaysana.

Mr Xaysana, 41, was arrested at the airport after arriving from Phuket in a joint operation led by the two agencies.

They had worked closely with their Lao counterparts for five years, trying to arrest him by tracking his mobile phones, travel and money trails. Other tips came from the interrogation of drug traffickers who were earlier arrested.

Until now he had always eluded them, and had never been charged.

Information has been passed on to Malaysian, Lao and Singapore authorities so they could crack down on the network's operations in their countries, the ONCB said.

So far authorities have seized 74 assets with a total value of more than 100 million baht from the gang --  two houses, 14 land title deeds, 14 expensive cars, 11 motorcycles, two tractors, 29 bank accounts, gold ornaments and baht and dollars in cash from 36 raids at widespread locations.

In a follow-up to the arrest of Mr Xaysana, NSB police searched a house in Thanya Buri district in Pathum Thani on Friday and seized eight bank account books kept in a room locked from the outside.

House owner Adul Sapya told police he did not know who owned the items inside the room.

Pol Lt Col Jeerapong Rujiradamrongchai, a deputy commander of the NSB, said police suspected someone in the house worked for Mr Xaysana's network.

The Office of the Narcotics Control Board holds a press briefing on the arrest of alleged Lao drug kingpin Xaysana Keopimpha on Friday. (Video by Patipat Janthong)