Bank consortiums to bid for provision

PromptPay's consumer-to-consumer (C2C) electronic fund transfer service under the national e-payment scheme will kick off on Friday, after being pushed back days before its first big scheduled launch in October of last year.

The C2C service is in the final stage of test runs. Test runs on big money transfers and other transactions have gone smoothly, as did the security test, a source who is familiar to the matter said.

The rollover of PromptPay's C2C service was extended from the initial plans at the end of October last year mainly due to a "technical glitch", as well as further testing to ensure security. The problem largely stemmed from differences in the systems between local banks and the UK-based payment infrastructure operator VocaLink, the company hired to develop PromptPay.

The postponement could undermine the confidence of some consumers, as most are already concerned about the security of PromptPay's service and prefer to hold off on using the service until they are sure that it is safe. Only 14-15 million of a total 40 million bank accounts have signed up for PromptPay after pre-registration kicked off in early July 2016.

Even though PromptPay's C2C service has stalled, the government-to-consumer service (G2C) has been launched as scheduled and the government has already paid cash handouts to qualified low-income earners who signed up for PromptPay. The Revenue Department is also using PromptPay's G2C channel to distribute personal tax income refunds. 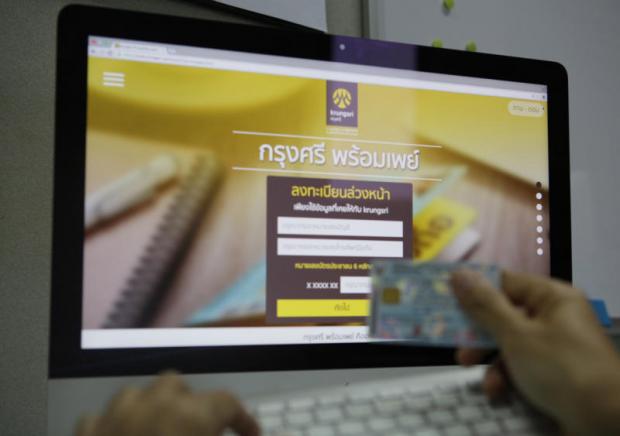 A user signs up for PromptPay at the Bank of Ayudhya website. PromptPay is set to kick off its consumer-to-consumer service on Friday after being pushed back from October last year. (Photo by Apichit Jinakul)

The money transfer fee of PromptPay's C2C service will remain unchanged, he said.

Money transfers between banks are charged at 10-50 baht per transaction, depending on the amount, the recipients' bank and destination.

Executive vice-president at CIMB Thai Bank Adisorn Sermchaiwong said the bank had planned to roll out its internal PromptPay C2C service, as a pilot project, from Jan 21. The bank has 2,000-3000 accounts registered for the service.