A conflict in connection with illegal activities is believed to be the motive behind Monday's killing of a British man shot while sitting in his car in Pattaya.

Tony Kenway, 39, was shot dead while sitting in the driver's seat of his red Porsche Cayenne GTS in a car park in front of Sanit Sports Club Co in tambon Pong, Bang Lamung district of Chon Buri.

Eyewitnesses told police the killer was a chubby man, wearing a white T-shirt and a black jacket, sports shoes and a cap that partly hid his face. He had been seen standing under an awning in front of the fitness shop.

Thai language Kom Chad Luek newspaper reported they were seeking two foreigners including the suspected hit man who killed Kenway. The newspaper said they were a British man known as Miles Dickens Turner, and a South African-British subject whose name they reported as Abel Caldeira Bonito.

Both men had reportedly left Pattaya for Cambodia via Trat shortly after the murder, the paper quoted police as saying.

Kenway had walked from the shop to the car and sat in the driver's seat. The gunman went over to the car, yanked open the door and fired a single shot to the head. He then ran to a waiting motorcycle, which quickly sped away. 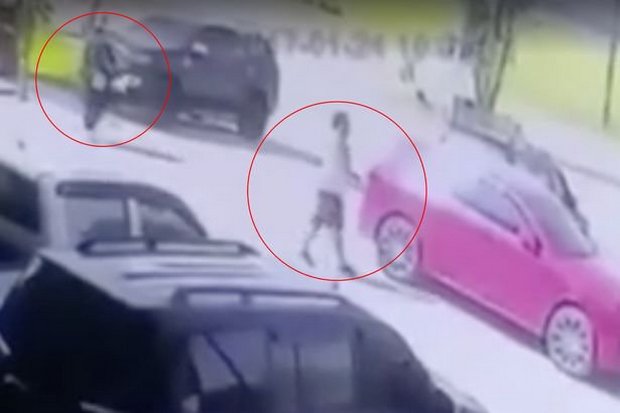 The 'chubby' killer (left) walked up behind Kenway as he got into his Porsche, then wrenched open the door and killed him with a single shot to the head. (CCTV image supplied)

Police collected a single spent bullet cartridge case and a cigarette butt from the crime scene for examination.

A source with the police investigation team said investigators discovered Kenway allegedly ran an online football gambling website and had a conflict with a group of influential foreigners concerning illegal activities in the area.

Kenway tried unsuccessfully to settle the conflict with the group twice, and this could be the motive for the murder, the source said.

But Kenway's wife Somporn, 32, told police that her husband had set up a company doing website design at Jomtien Beach. She admitted Kenway had recently had a conflict with a former business partner, only identified as Toby, 45, but she did not know if this was the motive for the murder.

Police were examining footage from security cameras in the area and questioning more witnesses. The victim's body was sent to Bang Lamung Hospital for a post-mortem examination.

In a separate case, police on Wednesday caught a US citizen wanted on drugs charges in the United States, who was working as a teacher at the British International School of Krabi.

Alexander Jonathan Rosen, 36, described by US authorities as a "dangerous man", was apprehended in front of the school by a team of police officers led by Immigration Police Bureau (IPB) chief Pol Lt Gen Nathathorn Prousoontorn.

"Mr Rosen allegedly worked for a drug network in the US," Pol Lt Gen Nathathorn said, adding authorities would deport him back to the US.

"He is a threat to society," he said. 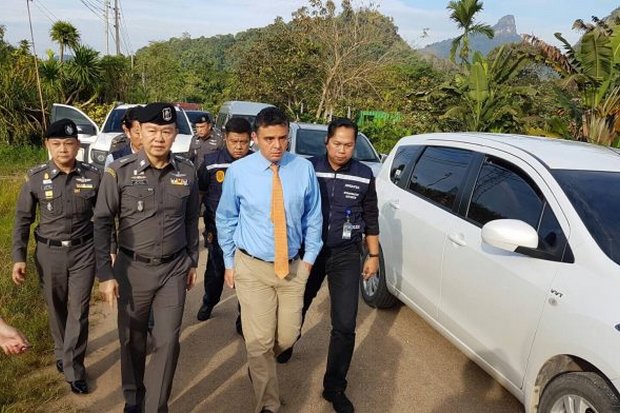 Police arrested Mr Rosen in front of the British International School of Krabi, where he was hired last year as a teacher. (Photo via Facebook)

Thai police launched a search for Mr Rosen after being contacted by US authorities who suggested officers should tread carefully when trying to arrest him as he had been described by American police as "dangerous".

According to Immigration police, Mr Rosen entered Thailand as a tourist on Oct 31, 2015. He later left the country and returned many times before landing a teaching job at the school in Krabi.

The suspect renewed his visa on Sept 14 last year.

Once alerted, police did not take long to find him, said Pol Lt Gen Nathathorn.

He attributed the quick arrest to help received from the International Schools Association of Thailand.

He said they should contact immigration police if they need help screening foreign staff.