City Hall will continue with the regular Wednesday exercise sessions for officials ordained by Prime Minister Prayut Chan-o-cha, despite the collapse and subsequent death of a respected district chief during a game of football.

Phra Nakhon district director Pramern Krairos, aged 57, fell to the ground unconscious while taking part in a game of  football on Wednesday afternoon and died on Thursday morning at Vajira Hospital. 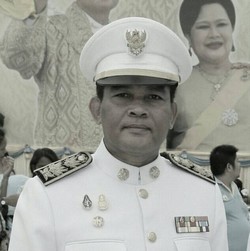 About 2pm on Wednesday, Pramern led a team from Phra Nakhon district office in a game of football as part of Prime Minister Prayut Chan-o-cha's policy that government officials should exercise on Wednesday afternoons.

About 20 minutes into the game Pramern collapsed unconscious. He was rushed to Vajira Hospital where he underwent surgery.

On Thursday afternoon, the hospital said  Pramern had died of acute heart failure.

A press statement signed by Asst Prof Prayut Siriwong, dean of the faculty of medicine of Vajira Hospital, Dr Surawut Leelahakorn, the hospital director, and Dr Kulyos Jongpipat, a heart specialist, said Pramern had clogged coronary arteries and was in a serious condition when admitted to the hospital about 5pm.

Doctors operated to widen the arteries and allow a supply of blood to the heart.  Pramern did not respond to treatment and died at 7.10am on Thursday.

Bangkok city clerk Phattharut Thantranont said Pramern was a hard-working district director.  He had kept Sanam Luang in good condition for more than 100 days as mourners gathered there following the passing of King Bhumibol Adulyadej.  His death was a loss to the Bangkok Metropolitan Administration and to his family.

Despite Pramern's death, the BMA would continue with the Wednesday workout programme.  BMA staff would be advised by their doctors not to over-exercise, and keep within limits allowed by their individual health condition, he said.