A senior police officer inspects the British victim's red Porsche Cayene GTS, which was cordoned off after the shooting in Bang Lamung district, Chon Buri, on Tuesday. (Photo by Trinai Jansrichon)

CHON BURI - Arrest warrants have been approved for two foreign suspects in Tuesday’s murder of a British man in Pattaya - one for the gunman and the other his alleged accomplice.

Investigators have learned the two suspects hired a van and driver to travel from the Cambodian border in Trat to Pattaya last Thursday, and returned there on Tuesday, after the murder.

The Pattaya provincial court on Thursday morning approved a police request for warrants for South African Abel Calderia Bonito, the suspected gunman, and his accomplice Miles Dickens Turner, a Briton believed to have driven the motorcycle that whisked the killer away.

Tony Kenway, 39, was shot dead in broad daylight while sitting in the driver’s seat of his red Porsche Cayenne GTS in the parking lot in front of Sanit Sports Club Co in tambon Pong, Bang Lamung district of Chon Buri on Jan 24.

Kenway had walked from the fitness shop to the car and sat down behind the wheel. As seen in surveillance camera footage, the gunman strolled up the car, pulled open the driver's door and fired a single shot into Kenway's head with a pistol. The gunman then walked to a waiting motorcycle, which quickly left the area. (continues below) 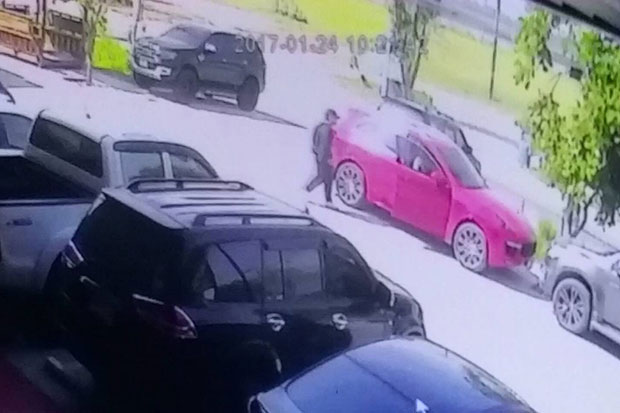 The hitman approaches the parked Porsche, just before he opened the door and killed Tony Kenway, 39, with a single shot to the head in Bang Lamung district of Chon Buri on Jan 24. (CCTV image supplied)

The gunman and his accomplice on the motorcycle were believed to have quickly fled to Cambodia, passing through Khlong Yai immigration checkpoint in Trat, the Chon Buri police chief said.

Kenway's wife Somporn, 32, earlier told police her husband had set up a company doing website design at Jomtien Beach. He lately had a business conflict with a shareholder, but she did not know if this was the motive for the murder.

However, police investigating the case believe a conflict involving an illegal business was the likely motive for the murder.

A source on the investigation team said Kenway had been involved in an illegal call centre that had preyed on foreign nationals in European countries.

Kenway was arrested in Thailand in September last year and was granted bail, saying he would fight the charges.

Investigators had learned Kenway had a conflict with a former partner in the call centre who owed him 8 million baht. Kenway had kept asking for payment. When the man failed to settle the debt, Kenway had asked police to arrest him.

His former business partner then moved to Cambodia where he opened a similar call centre operation. However, it did not do well, the source said.

It was believed the two suspects were jointly involved in the Cambodian operation.

Kenway was also facing charges in the UK and was wanted by British authorities, the source said.

Thairath quoted Pol Gen Suchart as saying  a 48-year-old van driver was hired by the two  suspects in the Thai border town of Hat Lek in Trat province last Thursday to drive them to Bang Lamung.

The driver said Mr Bonito and Mr Turner paid him 3,000 baht a day plus a 5,000-baht tip when they arrived at Hat Lek. He said the men did not act suspiciously. He confirmed the identity of the two when police showed him their pictures.