'No need to extend' statute of limitations

The anti-graft body has advised Thai Airways International (THAI) to pursue civil lawsuits for damage caused by those involved in the Rolls-Royce bribery scandal.

However, the statute of limitations for cases in the third period between 2004-2005 still stands, and THAI can still pursue civil action against those involved during this period, Mr Sansern said.

He added that the national carrier can also petition the Anti-Money Laundering Office (Amlo) to examine the money trails of those involved and freeze their assets.

Mr Sansern said there was no need for Prime Minister and National Council for Peace and Order chief Prayut Chan-o-cha to exercise his special power under Section 44 of the interim charter to extend the statute of limitations on those expired bribery cases, as this would cast the country in a negative light. 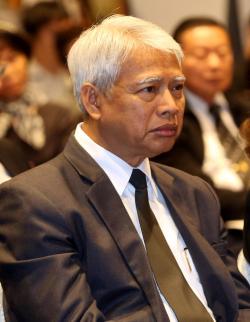 The NACC panel will have to wait for more information from the UK's Serious Fraud Office (SFO) before taking further action, he said.

According to the statement of facts prepared in a British court, the period of the scandal dates from 1991 to 2005 and involves payments totalling about US$36.38 million (1.28 billion baht) to "regional intermediaries".

Some of the money was for individuals who were "agents of the state of Thailand and employees of THAI Airways". The scandal involved the purchase by THAI of Rolls-Royce T800 engines, according to the document.

The bribery occurred over three periods. One concerned the period between June 1, 1991 and June 30, 1992. Rolls-Royce agreed to pay $18.8 million to intermediaries during the period to "influence the purchasing decision".

THAI initiated an investigation into the bribery allegations after they were made public and the findings are due to be announced on Feb 20.

Mr Sansern also said the NACC held a teleconference meeting with the SFO on Thursday to discuss the matter.

The SFO had asked the NACC for a formal written confirmation that the NACC is the main agency responsible for handling the bribery cases.

The SFO has also asked that other agencies also send letters of confirmation that the NACC leads the probe, Mr Sansern said, while adding that the letters are expected to be sent to the SFO next week.

He said the questions the NACC will ask the SFO will cover who received the bribes, when and how.

As well as the NACC, the Office of the Auditor-General, the Public Sector Anti-Corruption Commission, THAI and various other agencies have all formed their own teams to seek information from the SFO.

Sangsit Piriyarangsan, the dean of Rangsit University's College of Social Innovation, told a seminar that Thailand should resort to the mechanisms under an agreement with the UN which set standards to fight money laundering and stipulates that money laundering cases have no statute of limitations.

Mr Yothin on Thursday petitioned Prime Minister Prayut to invoke Section 44 of the interim constitution to probe the procurement of 10 Airbus A340 planes bought by the national flag carrier, which have now been grounded and "left to rot".

Mr Yothin, a former THAI pilot, called for an inquiry into the procurement of the fleet of Airbus A340-500 and A340-600 aircraft.

The deal should be investigated for its transparency and investment worthiness, Mr Yothin said. The airline had proceeded with the purchase even though the National Economic and Social Development Board had objected to it.

Capt Kanok said the company is waiting for notification from the Prime Minister's Office.