An image of the unfortunate whale shark spotted by employees of Mubadala Petroleum (Thailand) and posted on the Facebook page of Thon Thamrongnawasawat.

A whale shark whose tail had become caught in a two-metre rope coated with sharp barnacles has been released from its suffering and treated with antibiotics in the Gulf of Thailand.

Thon Thamrongnawasawat, assistant dean of the Faculty of Fisheries at Kasetsart University, posted an account of the successful mission, the first of its kind in Thailand, on his Facebook page on Saturday. 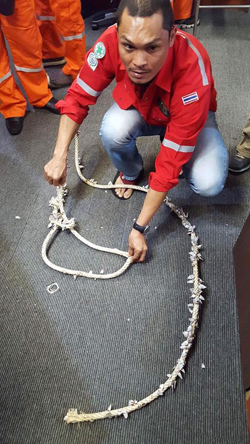 Sharp barnacles on the rope caused extreme discomfort to the whale shark. (Image from the Facebook page of Thon Thamrongnawasawat)

He said the whale shark was a familiar sight to employees working on an oil rig operated by Mubadala Petroleum (Thailand) Co in the Gulf. Three or four days ago they noticed the rope on its tail and observed it flicking its tail to try to release the rope.

A diving team from Seaworld, led by Lt JG Pokket Phumpruk, happened to be in the area and tried to remove the rope but strong winds and high waves frustrated their efforts.

The Marine Science Association was contacted for assistance. It later asked the Department of Marine and Coastal Resources to send a veterinary team as the whale shark is one of 19 protected animals.

A team of seven specialists finally managed to remove the rope and treat the wounds on the shark's tail with antibiotics.

Mr Thon said he suspected that the whale shark might have got caught in the equipment of some fishermen who cut the rope to release it. They might not have noticed that the rope was still attached to its tail.

He said he expected that the wound would heal soon. Staff from Mubadala will continue monitoring the animal.

The department believes there are around 200 whale sharks, split equally between the Gulf of Thailand and the Andaman Sea.

The whale shark is the largest species of any fish. Females have been known to reach 19 metres in length and weigh up to 31 tonnes, although most whale sharks never reach such record sizes. They feed almost exclusively on plankton and are completely harmless to humans.