Thailand at head of drug ‘highway’

The arrest of Xaysana Keopimpha, the suspected mastermind behind several drug rackets in Southeast Asia, has raised fears that Thailand has become a "superhighway" for drug trafficking. 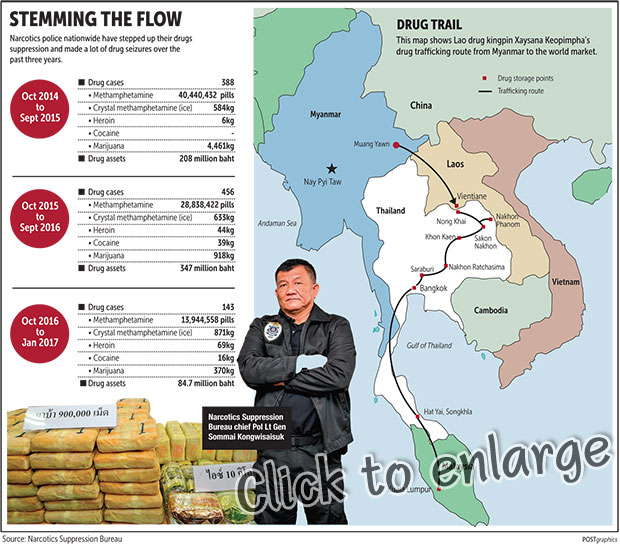 As the extent of the trafficking picture became clearer, a string of raids was launched around Thailand this year, resulting in the arrest of key drug suspects and the seizure of assets including a 20-million-baht Lamborghini.

The marquee "supercar" is thought to belong to celebrity speed racer Akarakit Worarojchroendet. According to one suspect nabbed a few weeks after Mr Xaysana was arrested at Suvarnabhumi airport on Jan 19, the Xaysana gang trusted Mr Akarakit and left the car in his care.

While Mr Akarakit continues to be investigated, NSB officers are hunting more suspects of the drug gangs, both in Thailand and in neighbouring countries. Some of them are described by Pol Lt Gen Sommai as having "hi-so status".

This is an apparent reference to influential people in society who are involved in some way with a number of drug networks.

Not only are these people well known in Thailand, Pol Lt Gen Sommai told the Bangkok Post, but they also "hide" among the rich in Laos, Cambodia and Malaysia.

The head of these networks is Mr Xaysana, who is believed to own a range of businesses from luxury car dealerships to sawmills and hotels, Pol Lt Gen Sommai said.

Police will have to work hard to crack the networks, he said, but the NSB might find its operations faltering if it does not get the support of the neighbouring countries or does not widen the investigation to cover major drug masterminds.

This is the new course of drug crackdowns envisaged by the NSB under the leadership of Pol Lt Gen Sommai.

"We need to cut the tree at its core," he said, by targeting heavyweight suspects like Mr Xaysana. If officers only focus on the gangs, new members will step in.

The NSB chief said the idea of directing operations at drug masterminds was badly needed as Thailand is becoming a major route for transnational drug trafficking.

"It's a picture of a superhighway," Pol Lt Gen Sommai said.

As the centre of mainland Southeast Asia, Thailand shares mountainous areas with Myanmar and Laos called the Golden Triangle, notorious for drug production.

Drugs are smuggled through the northern provinces, but "new routes in Isan are now under watch", Pol Lt Gen Sommai said.

One route is via Nakhon Phanom, which adjoins Laos. Some members of the Hmong and Wa hilltribe ethnic groups are believed to use this route to smuggle drugs into Thailand. The drugs are kept at houses located in plantations or condominiums in Bangkok's outskirts before being delivered.

Some of the drugs are sent along a pipeline into Malaysia. The problem has raised fears in Kuala Lumpur of a crystal methamphetamine epidemic as Malaysia becomes not only a drug destination but a jumping-off point for trafficking to other regions, Pol Lt Gen Sommai said.

He said Malaysia was not doing enough to help arrest criminal suspects even though drug gangs are hiding in the three southernmost provinces of Thailand.

But as the so-called superhighway grows, he said, Malaysian authorities have begun to contact his agency. "I spoke to them and said if they needed help then they should deport criminal suspects fleeing from the three provinces into Malaysia back to Thailand."

Pol Lt Gen Sommai said a more active response from Malaysia was necessary to crack drug trafficking. Security officers in the three insurgency-torn provinces have seized millions of narcotics pills, mainly crystal methamphetamine, much of which was destined for Malaysia.

Laos worked closely with Thai authorities to arrest Mr Xaysana and his alleged drug racketeers, and Myanmar was paying more attention to drug issues. But Cambodia needed to do more, he said.

As Singapore lifted a colonial-era ban on sex between men while also taking steps to block marriage equality, AFP looks at dozens of countries that still criminalise the LGBTQ community: