His Holiness meets the devotees who arrived at Wat Rajabopit early Sunday. (Photo by Wichan Charoenkiatpakul)

The appointment of Somdet Phra Maha Muniwong as the new Supreme Patriarch by His Majesty the King has left no room for doubt about his credentials for the top monastic post, according to people close to him.

Committed to the ascetic life, staying away from physical pleasures and comforts, the 90-year-old abbot of Wat Rajabopit in Bangkok has proved to be a worthy successor to the late, highly-revered supreme patriarch, Somdet Phra Nyanasamvara, who passed away on Oct 24, 2013.

Buddhists have welcomed the new appointment and have agreed Somdet Phra Maha Muniwong, Amphon Amparo, has what it takes to assume the top monastic role. 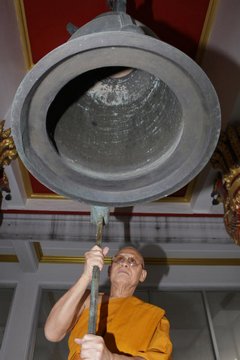 A monk rings a temple bell 20 times to mark the investiture of the new Supreme Patriarch. (Photo by Apichit Jinakul)

Among the eight senior monks holding the title of somdet - the second-highest ranking after the supreme patriarch in the monastic hierarchy, Somdet Phra Maha Ratchamangalacharn, the 92-year-old abbot of Wat Pak Nam Phasi Charoen, is the most senior, receiving the title in 1995 before all the rest.

But a question of propriety was raised as he was embroiled in a car tax evasion scandal.

Next in line was Somdet Phra Maha Wirawong, 99, abbot of Wat Samphanthawong, who received the somdet title in 2001, though he is said to be in frail health.

Prime Minister Prayut Chan-o-cha previously said the government would consider seniority, appropriateness and the health of potential candidates for the supreme patriarch post before nominating them for royal consideration.

Given those factors, Somdet Phra Maha Muniwong - who is the third most senior on the Sangha Supreme Council (SSC), having received the title of somdet in 2009 - was deemed as the most fitting choice as he met all the criteria.

On Feb 7, the prime minister broke the news of the appointment of Somdet Phra Maha Muniwong by His Majesty the King as the 20th Supreme Patriarch, to the joy of Buddhists nationwide.

The nomination and appointment of the new supreme patriarch was in compliance with the amended Sangha Act passed by the National Legislative Assembly on Dec 29 last year.

His Majesty the King presided over the investiture of the new supreme patriarch at Wat Phra Si Rattana Satsadaram or the Temple of the Emerald Buddha at 5pm Sunday. The ceremony, the first in many decades, was broadcast live on the TV Pool. 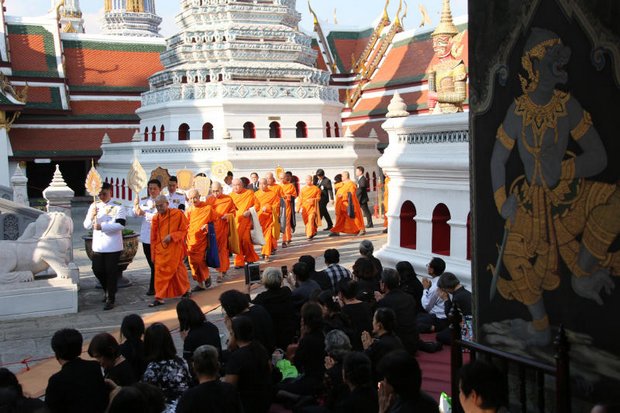 Somdet Phra Maha Muniwong belongs to the Dhammayuttika Nikaya, one of the two major sects of Theravada Buddhism in Thailand. The other is Maha Nikaya.

Traditionally, the Supreme Patriarch position alternates between the two sects.

Santisuk Sophonsiri, a Buddhism scholar and author of a book titled My Lord Buddha, revealed Somdet Phra Maha Muniwong strictly follows the rules and regulations of the clergy, and particularly the Vinaya - the disciplinary code of conduct for Buddhist monks.

This has won him recognition from monks of the two Buddhist sects.

Mr Santisuk also said residents who live in the neighbourhood of Fueang Nakhon Road near Wat Rajabopit hold the top monk in the highest esteem and greatly respect other monks from the temple.

The new Supreme Patriarch has gained admiration of many who have witnessed him take the early morning alms bare-footed.

When invited to attend a religious function outside the temple, he catches a taxi rather than take a chauffeur-driven luxury sedan as is the preference of some other senior monks.

Despite his high monastic ranking, Somdet Phra Maha Muniwong remains accessible and approachable. He always sees to it that the monks at the temple behave properly and are looked after well, Mr Santisuk said.

According to Phra Prommethi, a spokesman of the SSC, Somdet Phra Maha Muniwong is committed to a simple life with barely any physical pleasures.

Phra Prommethi, also an SSC member, said when Somdet Phra Maha Muniwong was a young monk, he often visited and sought advice from monks who were renowned meditation masters widely respected for their monasticism in the Northeast.

While in the Northeast, he also practised in the style of an ascetic monk in the so-called forest tradition, going on forest retreats, spending most of his time on meditation and eating only once a day, Phra Prommethi said.

Somdet Phra Maha Muniwong is also known to be a disciple of the late Phra Ajarn Fahn Ajaro, a highly-revered Vipassana mediation master and the former abbot of Wat Pa Udom Somphon in the northeastern province of Sakon Nakhon.

He was among the first group of phra dhammaduta - a delegation of Buddhist monks sent to spread Buddhist teachings overseas. Dhammaduta means "a messenger of Dhamma or an ambassador of Dhamma". 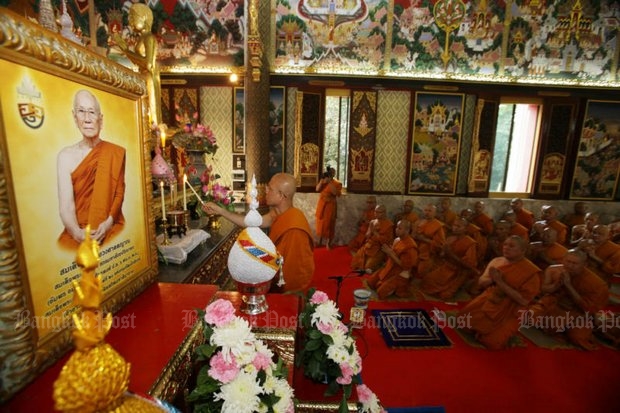 Monks deliver a mass prayer before the picture of the Supreme Patriarch at Wat Khienkhet in Pathum Thani. (Photo by Apichit Jinakul)

In 1973, the monk led a delegation of phra dhammaduta to Sydney, Australia, to blaze a path and lay the foundation for Theravada Buddhism to gain a foothold there.

Thanks to the monk's pioneering role, Buddhism has since gained a wider following and spread to other major cities such as Canberra, Melbourne and Darwin.

He has been noted and credited with spreading knowledge and teachings in Buddhism to Australia and elsewhere.

Phra Thepsumethi, the abbot of Wat Srisuriyawongsaram in Ratchaburi and the younger brother of Somdet Phra Maha Muniwong, said the new supreme patriarch is the second son of the family of nine children - four sons and five daughters.

When Somdet Phra Maha Muniwong was a young monk staying at Wat Rajabopit in Bangkok, he would make the long journey in those days home to Ratchaburi every month to visit their parents, said Phra Thepsumethi, also the Ratchaburi chief monk.

Tuenjit Mingkhamlert, 70, a sister of Somdet Phra Maha Muniwong, said family and relatives are pleased and proud the monk has been appointed as the new supreme patriarch.

"After we heard the good news, his siblings and relatives are elated and feel very proud. This brings the greatest honour to the family and people of Ratchaburi," Ms Tuenjit said.

The new supreme patriarch was born Amphon to Nab and Tarn Prasatthapong, a local business family, in Ratchaburi's Muang district on June 26, 1927.

He attended the Thewa Nukhro primary school in Lop Buri's Muang district before being ordained a Buddhist novice at a temple in Ratchaburi in 1937.

The young novice studied Buddhist teachings in Pali and graduated with a certificate in Pali studies at the fourth level in 1947.

He later moved to Wat Rajabopit where he was ordained a monk on May 9, 1948, with the late 18th supreme patriarch, Vasana Vasano, as his mentor.

There, the monk continued with his Pali studies and went on to receive a certificate at the sixth level in 1950.

The ninth level is the highest in Pali studies in Thailand.

The monk then studied at Maha Makut Buddhist University in Bangkok and graduated in religious studies in 1957 before obtaining a master's degree in history and archaeology from Banaras Hindu University in India in 1969. 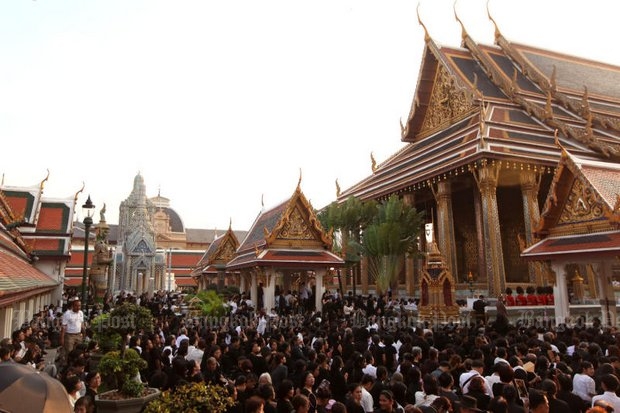 Devotees in the courtyard outside the ubosot of Wat Phra Si Rattana Satsadaram. (Photo by Wichan Charoenkiatpakul)