The wreckage of the van hit by a cement truck in Chiang Rai. (Photos from Facebook of NattyRescue ChiangRai)

Nine people were killed in Chiang Rai when a cement truck swerved across the Phahon Yothin Road median strip and struck three vehicles, while a similar crash in Krabi claimed the lives of three others, including two French tourists.

In Chiang Rai, a horrific accident which involved a six-wheeled cement truck, a passenger van, a Honda Jazz and a pickup truck occurred on the Phahon Yothin Road at kilometre marker 946 in tambon Na Lae of Muang district at 2.40pm.

Witnesses said the cement truck, which was heading to Mae Sai district, swerved out of its lane to avoid rear-ending a motorcycle that was about to enter a soi, causing it to veer off the road and cross the median strip into the path of an incoming van carrying nine people.

The truck collided with the van and a Honda Jazz behind it. The pickup‘s driver failed to brake in time and struck the sedan. (continued below) 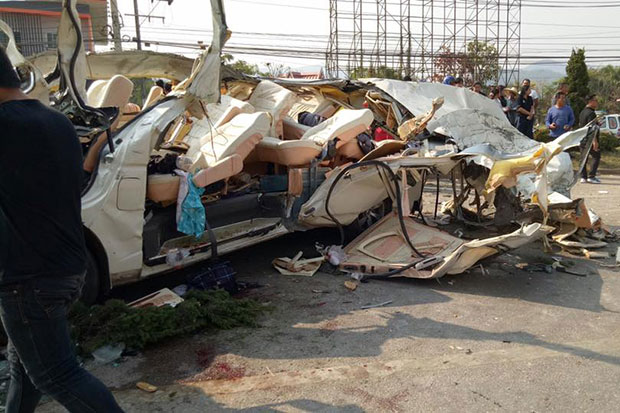 The severity of the impact killed seven passengers in the van and the truck’s driver instantly. Two other van passengers, a 38-year-old woman, Saksi Kamfoo, and an unidentified 13-year-old girl, were taken to Chiangrai Prachanukroh Hospital along with two injured women in the car – Kunlapan Chalermsakwitthaya and Kunlaporn Chavengsub, both 42.

Saksi was later pronounced dead at the hospital, leaving the 13-year-old as the only survivor in the van.

In Krabi, a Thai driver and two French women aged 21 and 55 were killed after their Toyota Fortuner was struck by a speeding 10-wheeled truck coming from the opposite direction on Phetkasem Road in tambon Pakasai of Nua Khlong district at 1pm.

Nua Khlong police investigator Pol Lt Col Wichet Suwanno said the SUV, driven by 39-year-old Tanad Parnkawn, was carrying four French tourists, two women and two men, when the truck went out of control on a curve and flew over the road divider and hit the vehicle.

Mr Tanad and a French woman died at the scnen while another woman was pronounced dead in hospital.

The tourists had just left Lanta island and were heading to Krabi International Airport when the accident took place. 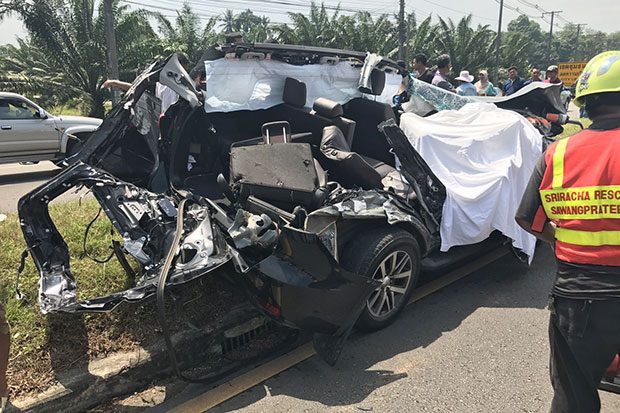 Two French women, aged 21 and 55, and their Thai driver were killed when their Toyota Fortuner was struck by a speeding 10-wheeled truck on Phetkasem Road in Krabi on Wednesday afternoon. (Photo from facebook of Krabi Pitak Pracha Foundation)