A security camera in a convenience story captures the attack by an 18-year-old Kuwaiti tourist on his compatriot, also 18, with a friend trying to intervene in Pattaya, Chon Buri, on Thursday.

CHON BURI – An 18-year-old Kuwaiti was caught and charged shortly after his compatriot was stabbed during a quarrel inside a convenience store in Pattaya on Thursday. 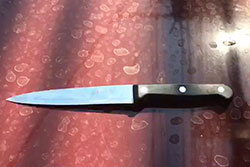 The knife a Kuwaiti youth allegedly used to stab his  compatriot inside a convenience store in Pattaya on Thursday. (Photo by Chaiyot Pupattanapong)

Police called to the scene found a foreign youth, Mohammed Alruhaili, 18, with two serious knife wounds to his back. He was rushed to a nearby hospital.

His alleged attacker, also 18, fled, but was later apprehended at a hotel room nearby. A knife believed used in the stabbing was seized as evidence.

Police said the two Kuwaiti tourists had been drinking together at a hotel and had begun to argue. Another Kuwaiti friend had intervened. The quarrelsome pair then went out to the convenience store near the hotel, where the row erupted again, and escalated into violence.

The attacker used a sharp, pointed knife to stab his compatriot, with their friend again trying to stop them. A security camera in the story captured the incident.