A monkey sits on a roadside tree in Sakon Nakhon's Phu Phan district. Many primates fled their forest homes on Phu Phan mountain range due to forest fires. (Pratuan Kajonvutinun)

SAKON NAKHON - Man-made forest fires on the Phu Phan mountain range have forced monkeys to flee their forest homes to stay near communities.

A group of monkey was spotted along Highway No.213 on Sakon Nakhon-Kalasin route in tambon Srang Kho in Phu Phan district on Saturday. Residents passing the area brought food to feed the hungry primates.

The practice by hunters of setting blazes to flush out wild animals and the scorching of bushes to encourage the growth of mushrooms and some wild vegetables were blamed for forest fires that caused air pollution in the area and affected the habitats and food sources of wild animals.

Officials at the forest fire control station in Sakon Nakhon on Saturday called on residents to stop setting fires in forests because it was illegal and affected wild animals on the Phu Phan mountain range, particularly monkeys. Many primates fled to live near communities due to a lack of food sources caused by the blazes. 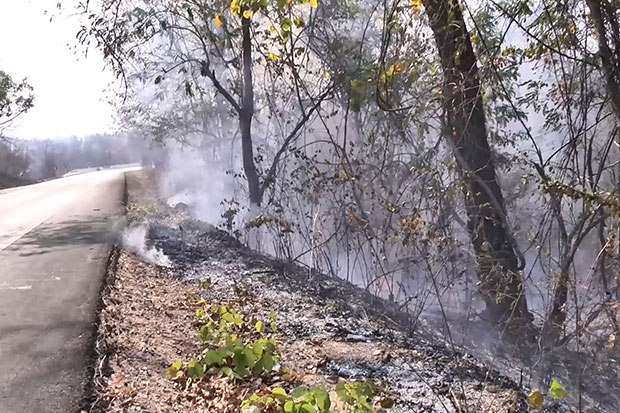 Forest fires spread to areas along Highway No.213 on Sakon Nakhon-Kalasin route. (Photo by Pratuan Kajonvuthinun) 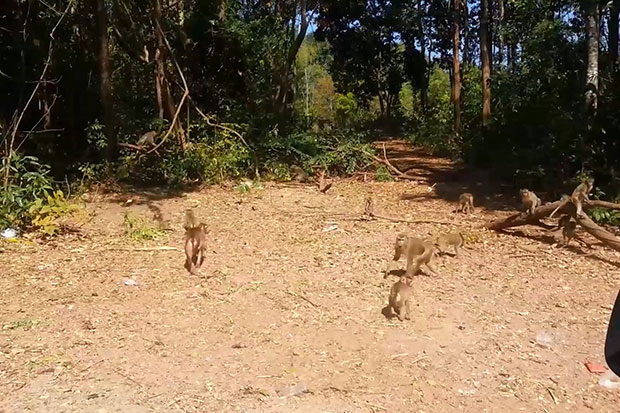 Monkeys flee their homes on the Phu Phan mountain range to search for food along a road in Sakon Nakhon. They are fed by passers-by. (Photo by Pratuan Kajonvutinun)