Police lead protest leaders against the coal-fired power plant away from their base in front of Government House on Saturday. (Photo by Thiti Wannamontha)

Five protesters leading a rally against a coal-fired power plant in Krabi have been detained at an army base for violating the law against public gatherings.

Prasitchai Nunuan, Akradej Chakjinda and ML Rungkun Kitiyakara were whisked away by police from the rally site in front of Government House on Saturday morning and taken in a police van to the 11th Military Circle. Banjong Nasae and Thatchapong Kaedam later joined them at the military barracks.

The move came one day after the Energy Policy and Planning Committee decided to go ahead with the controversial project, leading to a standoff between angry protesters and police at Government House. The panel is chaired by Prime Minister Prayut Chan-o-cha. 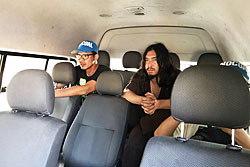 All five of those detained are members of or allied with the Network for Saving the Andaman, which opposes the project on grounds that it will damage the environment in the southern province.

They were arrested on charges of violating the military government's order against gatherings of five people or more after they refused to end the rally, said Lt Gen Sansern Kaewkamnerd, the government spokesman.

"Government House is off-limits for protests" under the law, he said, adding that the detainees would appear in civilian court on Monday.

As the government flexed its muscle to end the rally, the seizure of the protest leaders drew strong criticism from activists and their sympathisers.

A network of southern academics and communities urged the government to release the detainees and reconsider the plan to build the 780-megawatt power plant.

"The arrest of the key leaders to put pressure on the rally to end is against basic rights and humanitarian acts," they said in a statement.

The Thai Labour Solidarity Committee pledged to stay behind the protesters to block the project. It called for an end to government attempts to end the rally as it could lead to more confrontations and conflict.

Business operators relying on tourism on the Andaman coast are against the project because they fear visitors will start to avoid the area. But the Federation of Thai Industries backs the plant.

The government spokesman stressed the need to have sufficient power supply in the southern region and added that many other people backed the project.

The power plant, to be built in Muang district of Krabi, is part of a larger development plan for the southern region that was first proposed in 2014.

Protesters against the coal-fired power plant in front of Government House on Saturday. (Video by Thiti Wannamontha)