Thousands of monks and followers broke through barricades to enter Wat Phra Dhammakaya Sunday, as temple devotees launched a campaign on social media to mobilise hundreds of thousands of supporters nationwide to pressure officials into ending the temple search.

The incident occurred before the 3pm deadline given by the Department of Special Investigation (DSI) for people and monks who are not residents to leave the Pathum Thani temple to enable searches as DSI officials and police have sealed off the temple to control movements in and out. 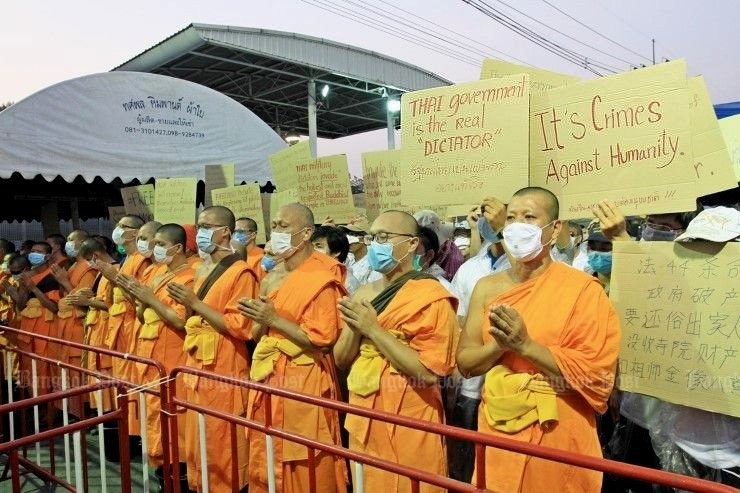 The insults mostly bounced off security forces who tried to herd all sect followers out and all monks into one area to help their search for elusive Dhammajayo. (Photo by Pattarapong Chatpattarasill)

"We have cooperated with the government every step of the way but this is one step too far," senior monk Phra Pasura Dantamano told the Reuters news agency.

"We're asking authorities to suspend the emergency law and lift their siege. Our supplies are low and we have been without power or water for three days."

Meanwhile, Phra Sanitwong Wutthiwaso, the temple's communication head, asked officials not to cut off the water and power supply, saying the temple's management had cooperated well with the searches.

The Facebook page "Thai Monks" posted a message calling Dhammakaya supporters nationwide to gather at the temple within 48 hours to oppose an order issued under Section 44 of the interim constitution to enable the temple searches.

The Facebook page is meant to show that monks from all regions of the country are ready to support efforts to pressure officials if they use force against the temple. About 500,000 followers from the Central region are expected to turn up in support, according to the Facebook page.

The Facebook page also posted a message: "The government is broke! Want to disrobe all the Dhammakaya monks and take eight tonnes of golden [Buddha] statues."

Later Sunday afternoon, as monks and temple followers showed their signs to the media, the DSI posted this meme on its Facebook page 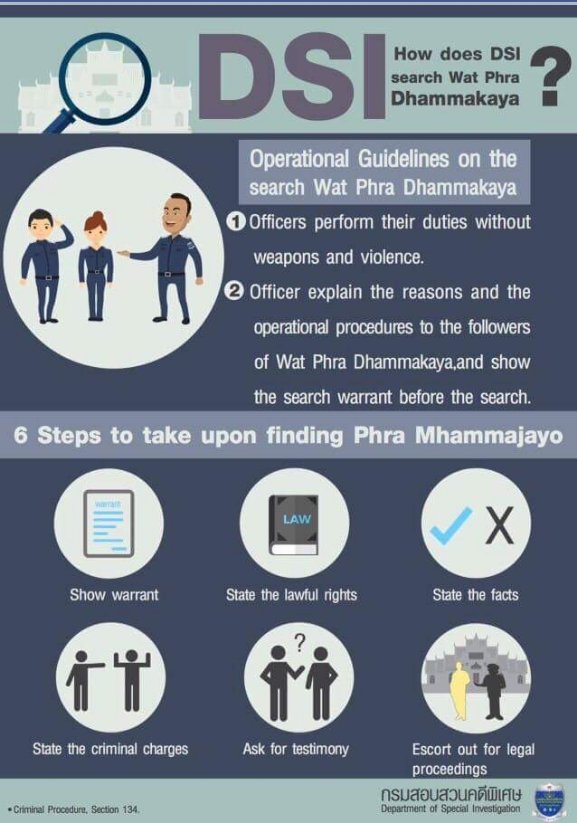 Meanwhile, about 1pm Sunday, followers and monks breached the barricades at Gates 5 and 6 on Bang Khan-Nong Sua Road in Khlong Luang district and managed to enter the temple's compound before boarding vehicles parked inside the temple to reach the inner areas through a special entrance.

During the breach, a follower threw a news agency camera belonging to a correspondent, worth about 300,000 baht, to the ground, breaking it.

About 10 minutes later, followers and temple monks emerged from inside the temple. Wearing face masks, they cut open Gate 5 and formed a human shield confronting police.

Pol Lt Gen Charnthep Sesavet, commissioner of the Provincial Police Region 1, tried to negotiate and calm the situation. Scuffles lasted for about 20 minutes before each side backed off.

At 3.30pm, temple followers and monks set up a tent near the Khlong L 2 canal outside Gate 5 and Gate 6 to welcome additional followers who were coming in to support the temple.

Standoffs between police and followers and monks continued into the evening. 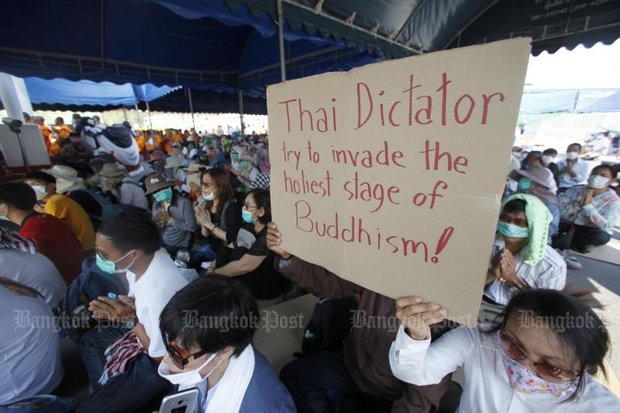 Dozens of monks (in background) and some lay people held up signs, mostly in English, criticising the security forces. (Photo by Apichit Jinakul)

Pol Lt Gen Charnthep said police needed reinforcements to control the situation and prevent any ill-intended parties from triggering an incident. He said officials had taken pictures of people who broke through their barricades and would later take legal action against them.

Pol Maj Woranan warned that anyone who instigates resistance against officials will face legal action.

DSI director-general Paisit Wongmuang later issued a summons for 14 senior monks of the temple to report to him at the Region 1 Border Patrol Police Bureau in Khlong Luang district at 6pm.

They include its former abbot Phra Dhammajayo.

Pol Col Paisit said non-resident monks and lay people were ordered to leave Wat Phra Dhammakaya by 3pm Sunday or they would be considered as having defied an order of the National Council for Peace and Order (NCPO) and be liable of up to one year in jail and/or a fine of up to 20,000 baht.

Since Thursday, DSI and police have searched the 2,300-rai temple compound for Phra Dhammajayo, 72, who is wanted for forest encroachment in connection with his meditation centres in several provinces, money laundering and receiving stolen assets in connection with the multi-billion-baht embezzlement at Klongchan Credit Union Co-operative.

Meanwhile, Phra Ajarn Thammasak, who claimed to be a monk at Wat Phra Dhammakaya for 30 years, held a media briefing outside Gate 5, revealing that Phra Dhammajayo used a car to escape arrest on Feb 16 — the first day the raid began.

Phra Thammasak said the former abbot has fled but not gone far because he is sick. He also said he was ready to lead reporters to see the former abbot's escape route. He did not say where he had gone.

Phra Thammasak said he decided to come forward because he was not satisfied with the temple's management, who were aware the former abbot was not inside the temple, but still let the DSI search go on.

This could have led to clashes between followers and officials and the DSI would have been blamed for any losses, the monk said.