These islets and the jutting shoreline in Chiang Rai are the focus of concern of activists opposed to blasting the Mekong to make it smooth sailing for Chinese merchants. (File photo)

A Chinese company contracted to survey the Mekong River for navigation purposes has submitted a plan to Thailand's Marine Department.

The Chinese company submitted the survey plan after the Thai cabinet approved the Development Plan for International Navigation on the Lancang-Mekong River (2015–2025) on Dec 27 as a framework to ensure safety in water transport along the river.

It also gave the nod to making initial navigation improvements on the river, including surveys and other plans to move the project forward.

The department has been assigned as a key agency to follow up on the plan. 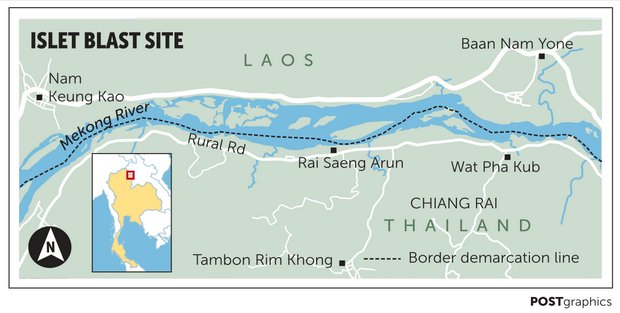 Mr Somchai said the Chinese company intended to survey a section of the Mekong River between Laos and Thailand.

Even though the cabinet assigned his department as a key agency to follow up on the navigation plan, it still needs to discuss the matter with authorities from other state agencies including the Immigration Bureau and the Customs Department.

He said his department would invite academics and environmentalists to join its team. No timeline was given for that step.