Masked monks and police tussle at the entrance to a road outside Wat Phra Dhammakaya on Monday morning. (Photo by Wichan Charoenkiatpakul)

PATHUM THANI -- Two policemen, three monks and an elderly woman were slightly injured in a scuffle at the mouth of to a road leading to Gates 5 and 6 of Wat Phra Dhammakaya in Khlong Luang district on Monday morning, according to media reports.

The clash occurred about 8am when about 20 monks walked from Gates 5 and 6 along the road to the entrance, which was blocked by police standing in rows.

The monks used loud hailers to demand the temple's disciples waiting at the entrance be allowed inside.

The situation became tense and police and the monks tussled face-to-face. (continues below) 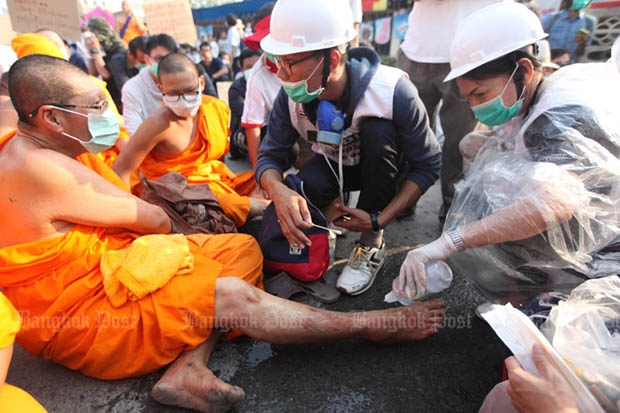 The two sides pushed and shoved for nearly 20 minutes, during which a policeman fell down and injured his wrist on a tree branch.  An elderly woman who apparently tried to separate the two sides also fell to the ground.

Two policemen were slightly injured in the tussle, one in the wrist and the other in the leg.  Also injured were the woman and three monks.

On Sunday, the Department of Special Investigation (DSI) issued a statement demanding that laymen and monks who were not residents of Wat Phra Dhammakaya leave the temple by 3pm.

In response, thousands of monks and followers broke through barricades and entered the temple, presurring officials to end the temple search.