PRACHIN BURI: Flames consumed a huge pile of used tyres awaiting recycling in Si Maha Phot district in a blaze that took eight hours to bring under control early Saturday. Nobody was injured.

Three fire trucks and crews of firefighters and rescue workers were deployed to the storage yard at Ban Khlong Klang village in tambon Nong Phrong after being alerted at 7.30pm on Friday.

Strong winds fanned the flames that spread quickly through several tonnes of old tyres kept at the 3.5-rai site.

Local officials ordered the deployment of 10 more fire trucks and two backhoes to help douse the raging fire, which was brought under control at around 3am on Saturday.

Heng Wattanasappaisarn,a  former Nong Phrong tambon chief, who owned the storage venue, sent a representative to meet with officials as he was in another province.

Authorities are investigating the cause of the fire. Damage has yet to be assessed. 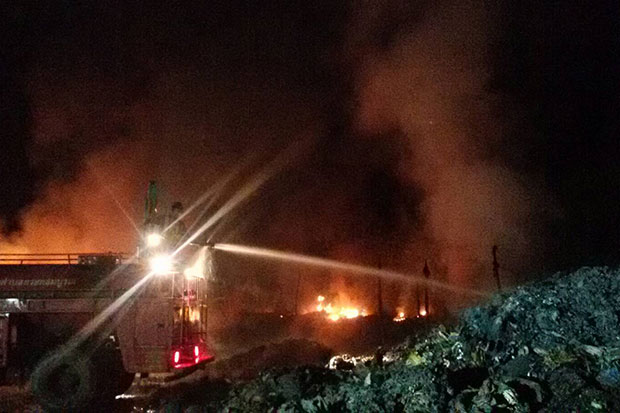