Monks banned from gathering at temple

Monks stage a symbolic burning of Section 44, the provision in the interim constitution used to authorise the search of Wat Dhammakaya, in front of the Klong Luang market in Pathum Thani on Saturday. (Photo by Thiti Wannamontha)

PATHUM THANI: Monks from across the country have been banned from gathering at Wat Phra Dhammakaya, as they will face legal action for obstructing officers searching for Phra Dhammajayo.

The directive from the National Office of Buddhism (NOB) came as Prime Minister Prayut Chan-o-cha on Saturday replaced its director with an official from the Department of Special Investigation (DSI), which is leading the search for the former abbot. The move was said to reflect Gen Prayut's dissatisfaction with the performance of the Office in connection with efforts to bring Phra Dhammajayo to justice.

Using his authority under Section 44 of the 2014 interim constitution, the junta chief appointed Pol Lt Col Pongporn Pramsaneh, formerly head of the Tax Cases Division at the DSI, as the new chief of the Office. Panom Sornsilp, his predecessor, was transferred to an inactive position as a special inspector attached to the Prime Minister's Office.

"The reforms must be implemented quickly and cannot follow normal procedure," said the statement in the Royal Gazette announcing the move.

The NOB issued an announcement on Saturday to seek cooperation from its branch offices in all provinces to ask monks and novices to refrain from joining the gathering of followers of the former abbot at the Pathum Thani temple, Thai media reported.

The Office also assigned senior monks to lead monastic governing committees to work with representatives from the Justice Ministry in trying to resolve the issues at Wat Dhammakaya. They are Somdet Phra Buddha Chinnawong, a member of the Sangha Supreme Council (SSC), the abbot of Wat Pichaya Yatikaram and chief of a monastic committee overseeing the Central Plains region.

The NOB has extended its cooperation to the DSI to search the 2,300-rai temple complex in Khlong Luang district for Phra Dhammajayo, who has not been seen in public for eight months.

The 72-year-old monk is wanted for alleged money laundering and receiving stolen assets in connection with the multi-billion-baht embezzlement of the Klongchan Credit Union Co-operative. As well, he faces charges of forest encroachment by temple branches in many provinces.

The search has been taking place intermittently over the past 10 days, involving hundreds of DSI officers, police and soldiers. Prime MInister Prayut Chan-o-cha invoked his unlimited powers under Section 44 to authorise the action.

Authorities have encountered frequent resistance from both monks and followers of the extraordinarily wealthy temple.

Pol Maj Voranan Srilam, the DSI deputy spokesman, on Saturday brushed aside claims that the DSI had no authority to search Wat Dhammakaya as the search warrant had expired.

He said DSI officials were currently performing their duties under the warrant. If the warrant expired, the officials could continue their search under Section 44, he added.

The DSI officials were exercising caution in carrying out their job to avoid a possible clash with supporters and followers of the former abbot, he said.

The DSI has cut off internet and mobile phone communications in and around the complex in an effort to "stop the spread of false and distorted information".

However, on Saturday it was reported that the temple's highly tech-savvy followers and monks had improvised a Bluetooth work-around that allowed them to continue communicating, albeit over short distances. 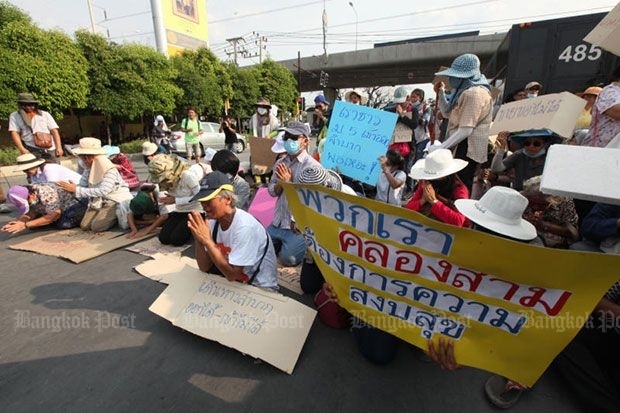 Residents of Khlong Sam in Pathum Thani gather near the temple to ask for the revocation of Section 44 under the interim charter, which was used to authorise the search of the temple. They said they were being affected and wanted peace restored in the community. (Photo by Thiti Wannamontha) 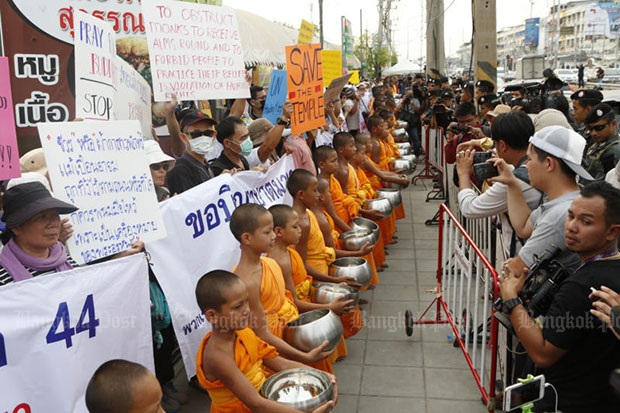 The Thai women's team arrived in Bangkok from Italy on Tuesday after their Volleyball Nations League assignment.

Spending during the ongoing Euro 2020 is forecast to stay tepid as the continued Covid outbreak has sapped consumer purchasing power.