Tracing the path of terror home

rock the boat: Travelling by boat can help bypass some Thai border authorities. The lax regulation at such borders has been cited as a factor in making Thailand an easy place for criminals to congregate.

The government has made clear its intention to make Thailand a Southeast Asian hub. Whether that means building a high-tech industry base or adopting leadership in aviation design, the idea of becoming a regional hub has been marketed with mass appeal.

However, the idea of the country as a "hub" does not necessarily denote a good thing.

Recent security reports have raised concerns about Thailand becoming a hub of another kind. Reports obtained by the Bangkok Post reveal that several criminal suspects in Thailand have potential links to fighters belonging to the Islamic State of Iraq and Syria (Isis) and Al-Qaeda, the multinational militant organisation founded by Osama bin Laden.

The fear that follows is that Thailand could become a new hub -- a meeting point -- for terror groups transiting in the region.

A further security agency says that Thailand is also being used as a base for producing counterfeit passports. These passports can be used to more easily carry out a range of transnational crimes, from terrorism to human trafficking, as well as arms smuggling.

Suspicion about a "secret training base" near the border of Tak province's Mae Sot district also lingers. A foreign intelligence agency found several illegal activities to be taking place in the area, including bomb making.

The findings prompted a security team to travel to Mae Sot to investigate.

There, in an area between Myanmar town Myawaddy and Mae Sot district, investigators found a space being used as an ostensible training ground. The source did not elaborate on what led them to this impression, but it did lead the military to release a statement that it plans to launch a mission to "weed out" any militant activities seen as a threat to Thailand.

A series of suspicious incidents have drawn the government's attention to Mae Sot as a potential terrorist hotspot. 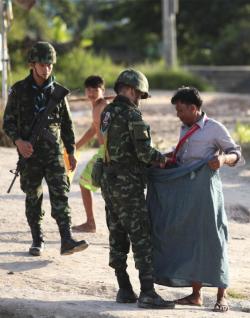 checking up and down: A Thai soldier examines a Myanmar migrant. Recently, in an area between Myanmar town Myawaddy and Mae Sot district, an unknown training ground was found. Photo: Patipat Janthong

Recently, 11 suspects were detained on accusations of stealing 885 guns from the Border Patrol Police Subdivision 24 in Udon Thani from 2007-11. They confessed that they had later sold the weapons to an armed group of Karen at the Mae Sot border.

Last week a security source reported that a man going by the name of Hayi Rasak was arrested on suspicion of working with the Arakan Army, an insurgent group from Myanmar. The suspect denied any accusations. His nationality was not disclosed.

Another recent arrest in Mae Sot involved three suspects, so far unnamed, who were found to be conducting passport forgery for Uighur and Rohingya customers. Both groups are Muslim minorities who have faced oppression by the Chinese and Myanmar governments respectively. They have engaged in violent battles to press for their political autonomy.

Other separate cases of fake passports have led some to speculate they were being used for what one source describes as "human trafficking and terrorism, including Isis movements in Thailand's three neighbouring countries".

"Passport forgery involves, and is central to, all transnational crimes," he added.

While Rohingya constitute a large segment of illegal immigrants in Thailand, Pol Lt Gen Nathathorn says that their criminal records do not reveal any discernible links to Isis.

However, the same source mentioned that Thailand could indeed be a potential transit point for terrorists in the region. Pol Lt Gen Nathathorn said a Uighur man who was caught on security cameras during the ransacking of the Thai consulate in Istanbul in 2015 was later spotted in Mae Sot district.

The incident, involving protesters breaking into the consulate, was a reaction to the Thai government's decision to deport 109 Uighurs charged with illegal entry to Thailand and China. The same man who was seen in Mae Sot was believed to have tried to contact an arms dealer to buy weapons for a new attack, according to an initial investigation.

The increasing concerns over a future terrorist event has led the international community to enforce more regular inspections of foreigners who could be using Thailand as a place to "hide, hatch and coordinate secret plots as well as produce counterfeit passports", as one source describes. 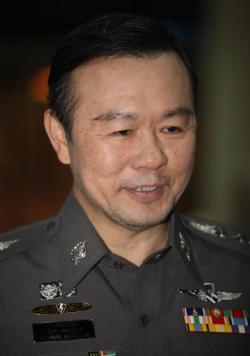 Foreign nationals are the most common perpetrators in document forgery cases. Recently, such cases have included a high number of Pakistani nationals. According to security reports, many of these individuals were found to have connections with major terrorist networks.

Last month two Pakistani nationals -- Muhammad Masood and Jawaid Islam, also known as Sunny and Bobby -- were arrested by Thai police for alleged involvement in transnational crimes. The police said they had suspected links with the detained Al-Qaeda operative Atiq ur Rehman, a fellow Pakistani national, alongside other Algerian suspects. All individuals had been previously detained for making counterfeit documents serving Isis operations.

Another three Pakistani nationals -- Muhammad Nisar, Sunil Paul and Samuel Amran Gill -- were also arrested in Thailand and deported in October of last year. Immigration police said they had stayed illegally in the country, but according to security reports, airport authorities believed they were involved in "some criminal activities near the Thai border".

In July of last year, police arrested Pakistani Abdul Ghani Bohra, alias Babu Rafiq, an alleged drug trafficker and peddler in fake travel documents. Security reports cited an investigation that accused him of being an important contact point for document counterfeiting gangs. They further suspected he had links with two Pakistani and Algerian criminal suspects who supplied fake passports to the people behind the Madrid blast in 2004.

The March 11 bombing that killed 191 people on a commuter train was believed to be executed by the Al-Qaeda network.

Thailand has drawn in many foreign criminals, including Pakistanis, for geographical and economic reasons, Pol Lt Gen Nathathorn observed.

Thailand is located at the centre of Southeast Asia between four other countries. With its relatively low cost of living, it is an easy place for migrants to stay for long stretches of time.

For criminal cases involving foreign nationals, the Thai police must operate in tandem with the Immigration Bureau.

Further complicating these legal dealings is the fact that many foreign nationals from developing countries tend to apply for refugee status at the UN High Commission for Refugees, granting them more coverage from authorities.

Alongside Iraqi and Iranian nationals, Pakistanis are under close watch by authorities as they are among the most common people behind the forging of passports for criminals, Pol Lt Gen Nathathorn noted.

New technologies have made it harder to use counterfeit passports, but several gangs have turned to simply using "real passports" for their customers. This means they use real passports featuring a photo of someone with a strong resemblance to their customers, instead of relying on fake books.

A further strategy fake passport holders use to avoid inspection is they often arrive at passport control counters near boarding time.

Officers are thus more reluctant to inspect their documents thoroughly, being saddled with time constraints.

Furthermore, if an officer bars an innocent passenger from travelling, damages can follow.

The Immigration Bureau has been tasked with determining the connection -- if there is any -- between these disparate cases and seeing if they all add up to something bigger like a terror plot that can be traced back to Isis. 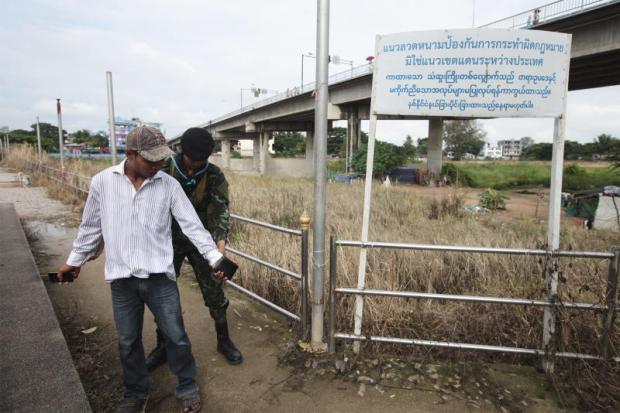 on the edge: Thai authorities patrol the Mae Sot border to prevent illegal immigrants from getting in. Several suspicious incidents, including bomb making, have been recently reported in Mae Sot. Photos: Patipat Janthong 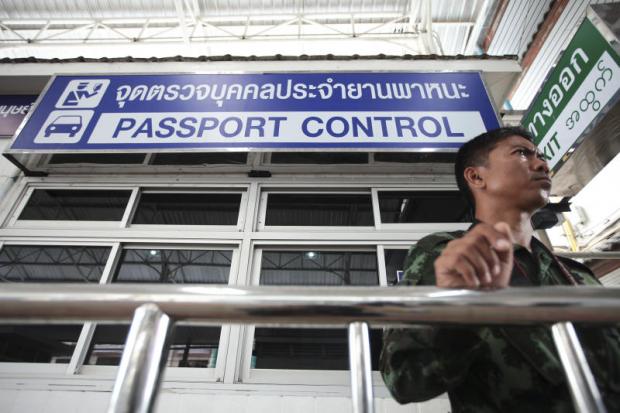 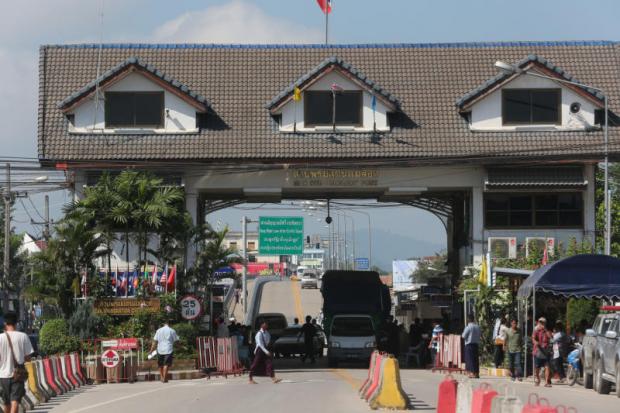 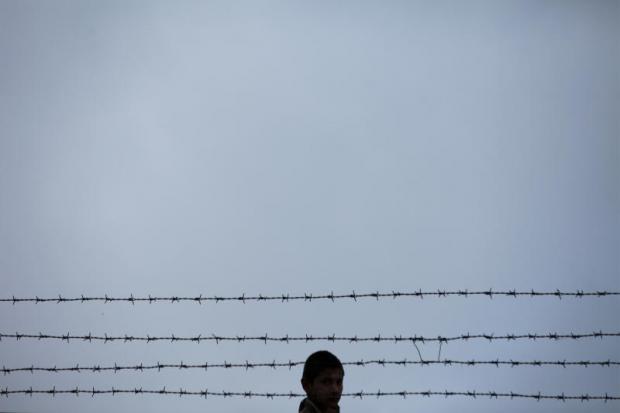 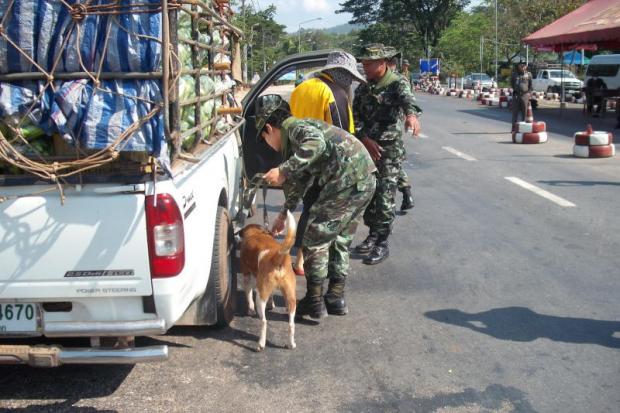 scenting messages: An immigration officer and her K-9 companion search for drugs that could be hidden in a vehicle crossing the Thai-Myanmar border. Photo: Assawin Pinijwong 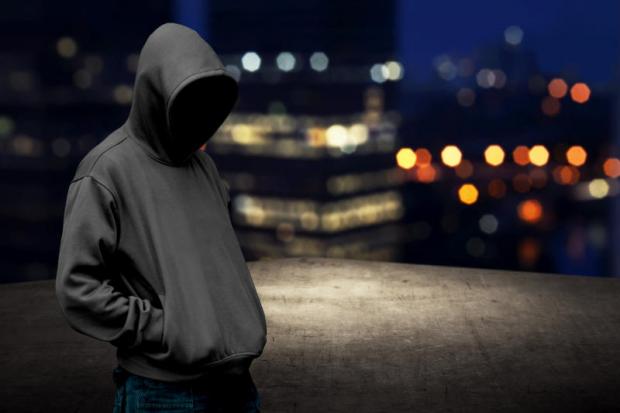 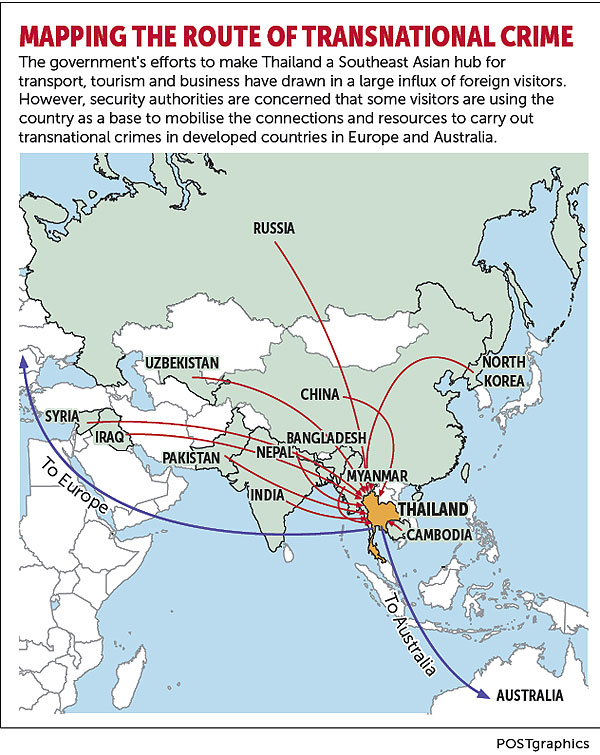