A policeman shows bullet shells collected at the scene where gunshots were fired on Sunday to celebrate a groom to get married during a parade to the house of a bride in Bang Lamung district, Chon Buri. (Photo by Chaiyot Pupattanapong)

CHON BURI - One of several gunshots fired to celebrate a groom tying the knot on Sunday ended up taking the life of another man watching the wedding parade passing by.

After finishing the meal, they were about to leave and saw the groom's parade approaching with several gunshots fired by the parade attendants. 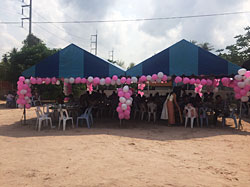 The wedding celebration is held less than 100 metres from the place where a man was killed by a gunshot. (Photo by Chaiyot Pupattanapong)

Ms Weerawan told Huay Yai police that Thanes collapsed in front of her as the shots rang out. Police at the scene found a bullet had entered his left chest, killing him instantly.

The gunshots from the parade stopped after the attendants found out that a man had been hit.

Police found a dozen bullet shells from 11mm, 9mm and .38mm pistols on the road. They went to the place where the bride was holding the wedding ceremony less than 100 metres away, but Sumeth Lomrorb, the groom, his bride and their guests refused to give information to authorities.

Police seized the camera from a photographer assigned to take pictures of the ceremony for evidence, while the ceremony continued.

Huay Yai police chief Pol Col Anan Purahong said at least three people fired shots during the parade as three kinds of bullet shells were collected, adding that all of the shooters had probably left the ceremony.

Police have not determined the size of the bullet that killed Thanes.

The newly-wed couple face legal action for allowing people to fire guns in a public place. Those who fired the pistols will be facing the same charge, while a murder charge will be added to the one who killed Thanes, Pol Col Anan said.

People upcountry sometimes fire guns into the sky for celebrations on many occasions including wedding ceremonies, although it is banned and police have warned of legal action.