The confrontation between the Dhammakaya sect and security forces continues to escalate, without a sign of the fugitive monk who touched it off. (Photo by Wassana Nanuam)

Authorities have tightened security around Wat Phra Dhammakaya after a man hanged himself from a telephone signal tower near the temple on Saturday night.

The wife and son of the man, Anawat Thanacharoennat, 64, said they were unsure of the motives for his suicide.

Before hanging himself, Anuwat put up a placard on the signal tower urging the government to lift an order under Section 44 of the interim charter, which designates the temple a restricted zone and allows security authorities to search the temple for its elusive former abbot, Phra Dhammajayo, who has been charged with embezzlement.

Pol Col Krissana Pattanacharoen, deputy police spokesman, said police and officials from the Department of Special Investigation (DSI) have increased security around the temple and stepped up patrolling security-risk areas in a bid to prevent a recurrence of such extreme actions.

Anawat's body will undergo a post-mortem exam at the Police General Hospital. An initial finding confirmed the man died of oxygen deprivation.

The doctors were also collecting body fluids for a drug test, the results of which are expected in a couple of weeks, according to Dr Pornchai Sutheerakun, head of the hospital's forensic institute.

Pol Col Krissana said authorities were checking to see if Anawat was a disciple of Wat Phra Dhammakaya.

However, the temple said in a statement that he was not. 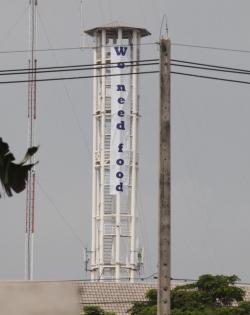 A cloth banner is tied to a tower inside Wat Phra Dhammakaya, saying the temple needs food.

Police were also finding out how Anawat gained access to the tower and was able to climb to the top. They have also interviewed the family.

His wife and son were unable to tell police the reasons behind his suicide as he had never exhibited erratic behaviour before.

After the body was lowered to the ground from the signal tower on Saturday night, police discovered an ID card on him.

Anawat was registered as living at house No.42/724 on Soi Nitmit Mai 40 in Bangkok's Khlong Sam Wa district.

He was also carrying a pen and a Samsung Hero mobile phone.

His wife, Nawaporn, and son, Rathanan, arrived at the Khlong Luang police station in Pathum Thani to give statements to investigators Sunday.

Mrs Nawaporn said Anawat left his house at noon on Saturday in a Toyota pickup truck without telling anyone where he was heading.

She said her husband sold dried fruit. He usually drove his pickup to the market in Rangsit to buy supplies to be packed for sale.

She said her husband was several hundreds of thousands of baht in debt. He had been under stress and was regularly taking a tranquilliser prescribed by Nawamin Hospital.

According to Mrs Nawaporn, about 10 years ago Anawat went to Wat Phra Dhammakaya to make merit.

He was ordained as a novice at Wat Paknam Phasi Charoen temple and had a lot of respect for Luang Phor Sod, the late abbot of the temple.

"The prime minister and the government would like to extended condolences to the man's family," government spokesman Lt Gen Sansern Kaewkamnerd said on Sunday.

He said authorities had tried their best to talk to the man and were preparing to save his life, but were not successful. He described what happened as "force majeure".

Wat Phra Dhammakaya, meanwhile, insisted it had nothing to do with Anawat's suicide.

Phra Sanitwong Wutthiwangso, the temple's communications head, said the incident took place outside the temple, though monks had tried in vain to talk the man into changing his mind.

"However, the temple praises (Anuwat) for his being steadfast to the cause of righteousness and justice," the monk said.

DSI deputy spokesman Woranan Srilam said the department regretted Anawat's death, describing it as a loss for all sides.

He said the department and the police sought the temple's cooperation to ensure no pretext is created that might expose its supporters to any harm.

Responding to calls for the lifting of Section 44, Pol Maj Woranan said authorities have taken the best precautions against any repercussion following the order.