Hunt for cop involved in extortion of Russian couple

Three suspects, their faces hidden by wool hats, are taken for a crime re-enactment on Koh Phangan on Thursday. They are among five suspects, including a police officer, accused of the assault and extortion of a Russian couple. (Photo by Supapong Chaolan)

SURAT THANI-A police officer being sought over the alleged assault and extortion of a Russian couple on Koh Phanganan is believed to have committed similar offences and faces being dismissed from the police force.

The team has received information as to the officer's whereabouts and are trying to arrest him.

Pol Snr Sgt Maj Suriyan and four accomplices are accused of the assault and extortion of Ekaterina Lobanova, 35, and her husband Anthon Lobanov, 36, while the Russian couple were holidaying on Koh Phangan.

The incident occurred on Rin beach of this popular island on Tuesday night when two of the accomplices had offered to sell illicit drugs to the Russian couple. They refused to buy the drugs.

The men then offered to give them a taxi ride to their room and they accepted the offer. But on the way to the taxi, three more men showed up and claimed to be police officers.

They demanded money from the tourists in exchange for dropping charges of illegal possession of drugs. When Ms Lobanova told the gang she had no money, one of them punched her in the face, took her iPhone 6 and other valuable items.

The gang abandoned the Russian couple on Ban Thong Nang Road in tambon Ban Tai, where they sought help from local people, who took them to police.

On Wednesday, three of the five men surrendered to police, followed later by a fourth suspect.

The police chief said the accused officer would be dismissed from the police force and face drastic action.

Another suspect, Thani Srikaew, 46, who has denied the charges, was not taken to the re-enactment. 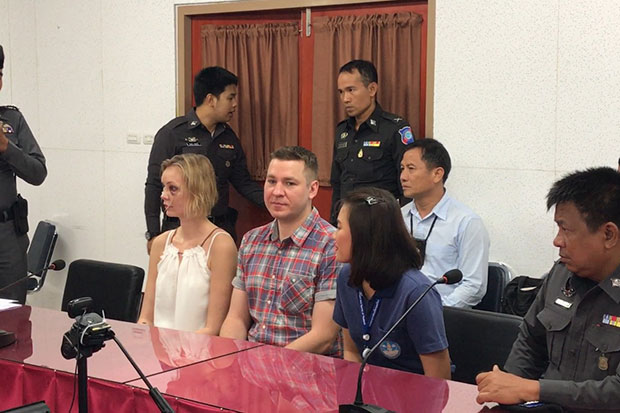