The government has vowed to take legal action against people who distort information and urged the media and the public not to fall prey to false and distorted information involving the officials' handling of the Wat Phra Dhammakaya controversy.

The move follows the spread of information casting state officials in a negative light, especially after the death of a female disciple at the temple, which has been sealed off for almost two weeks.

Pattana Chiangrang, 48, died in a flat inside the temple on Wednesday. Her death was blamed on the blockade of the temple by the Department of Special Investigation (DSI), which insisted that the woman had been dead for at least five hours before officials arrived.

There were also rumours attacking Pol Lt Col Pongporn Pramsaneh, the newly appointed director of the National Office of Buddhism (NOB), and the recent amendments to the monastic legislation aimed at the strict monitoring of temple assets.

Prime Minister Prayut Chan-o-cha said the media should not allow themselves to be used to spread distorted information and are obliged to report the facts to the public. 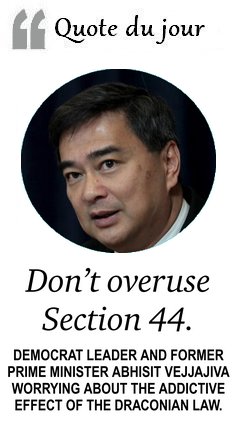 According to Gen Prayut, officials have explained what happened on that day and the information should be considered and weighed against the temple's claims.

He stressed the DSI must strictly enforce the law while calling on Wat Phra Dhammakaya not to exploit its followers' faith to prevent officials from carrying out searches.

Sahapol Srisombat, a rescue worker of the National Institute for Emergency Medicine, said Thursday the rescue unit received the first call at 11.52am on Wednesday to pick up a patient through Gate 7.

He said the officials took 17 minutes from the gate to reach the patient and the doctors spent five minutes trying to revive her. After the doctors failed to resuscitate her, the unit returned.

The rescue unit received a second call at 1.30 pm and the officials came to the scene to collect the body for delivery to Thammasat Hospital for an autopsy, he said.

A third call came 10 minutes after the second call and the officials were dispatched.

On their way, they met the temple's ambulance and were asked to follow. The officials decided to leave after talking to the monks and believing it was Pattana's case.

Also on Thursday, an older sister of Pattana blamed the DSI for her death, saying if communications had not been cut off by officials, Pattana could have been saved.

The woman, who asked not to be identified, said her last contact with Pattana was on Feb 28 at 11pm. She travelled from Phayao to the temple on Tuesday but was blocked from entering.

She said she decided to return home and was in Nakhon Sawan when she was informed by the temple that Pattana was dead.

"This sort of thing wouldn't have happened if the officials didn't cut off the phone signals. People who need medical assistance can't ask for help," she said.

She said that based on the autopsy report, Pattana died as a result of lung inflammation.

JAKARTA: Indonesia summoned Britain's ambassador on Monday to explain the raising of a lesbian, gay, bisexual and transgender (LGBT) flag at its embassy, and urged foreign missions to respect local "sensitivities" following a backlash among conservatives.

The wreckage of a $5 trillion rout in emerging markets is starting to look like a buying opportunity to some intrepid investors.