The Big Issue: A torture culture

A former Hong Kong journalist, Ms Shamdasani pointed out to her UN Human Rights Council and the world that not only does Thailand have no law against torture but it also has a government that guffaws when torture is alleged. More. Not only does it waive torture responsibility, she said, but the junta's personal legislature, the National Legislative Assembly, has cancelled plans to pass a law against torture, and isn't that proof of a torture culture.

As if to answer, the Appeal Court Region 8 addressed the most infamous torture-related case in recent justice. It upheld not just convictions but death sentences imposed by the criminal court against the 22-year-old Myanmar (legal) immigrants Zaw Lin and Win Zaw Htun.

You remember them even if the names didn't immediately ring a bell. They were arrested, charged, tried and convicted on Christmas Eve, 2015, for murder, rape and other crimes. This was over the unbelievably horrific killings of British tourists Hannah Witheridge, 23, and David Miller, 24, at Koh Tao beach on Sept 15 of the previous year.

Reminding readers here that it is illegal to criticise a court or its decisions, it is of some interest that the harsh Appeal Court decision wasn't actually reached last week. It was adopted earlier, in private, without lawyers or other representatives of the convicted killers.

"It's shameful that Thailand has sentenced them to death," said Phil Robertson, Asia deputy director at Human Rights Watch, who said other unprintable things about the decision. The peripatetic British expert on migrants, Andy Hall, said the defence team, which he advised, "were confident that the appeals court would dismiss the case, because there's so many irregularities".

Which, more than Ms Shamdasani could do from her comfortable seat in Geneva, actually raised the issue of the torture culture yet again to yet another level.

When Zaw Lin and Win Zaw Htun were arrested more than two weeks after the butchery of the young Britons, they were placed before a team of police interrogators right at Koh Tao. This is a matter of record, not speculation, although there is dispute over the team's competence and extent of brutality.

Police claimed in court their expert and trained team put hands on the accused Myanmar men, but only a tiny bit, almost lovingly. The accused signed a confession and within a few days were given access to lawyers, upon which they instantly recanted the confessions and gave remarkably similar testimony about what had happened in the interrogation room.

Suffice it to say they claimed to have signed confessions to stop the pain and prevent the chief inquisitor from carrying out the worst of his threats, such as amputation and death.

Zaw Lin and Win Zaw Htun described rough stuff by both police and the interpreter, and displayed graphically their claim about plastic bags tied over their heads to cut off air.

Ms Shamdasani's "culture of torture" is a rude and evocative phrase that was easily waved off. Critics might be better served polemically to get in the face of top people by saying, simply, that torture is way too common and far too ignored. 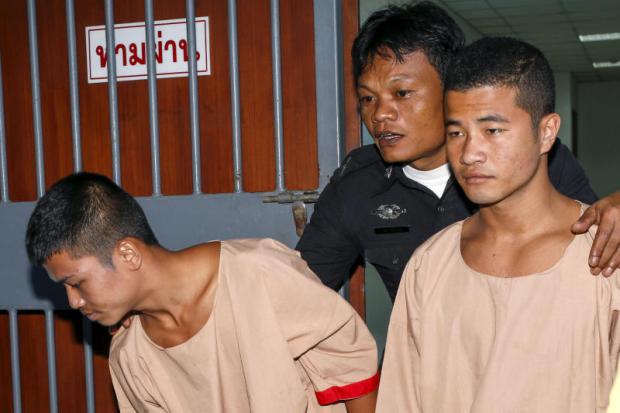 That is what three prominent civil rights activists did last year. They didn't just attract the attention in high places, they panicked the inhabitants. The three currently face lawsuits and criminal charges that could put them away for a long time simply for researching, writing and publishing Torture and Other Cruel, Inhuman or Degrading Treatment in the Deep South.

The upshot is that authorities are turning the trio into martyrs. By printing this booklet with 54 discrete, first-hand reports of torture by state security officers, Somchai Homlaor, a leading civil rights lawyer, Pornpen Khongkachonkiet (Cross Cultural Foundation), and Anchana Heemmina (Duay Jai Group) definitely got the bigwigs' attention.

Like corruption, torture is never tolerated but sometimes encouraged. Whether it's culture or just ingrained habit, those at the top remain complacent.