Reporters from selected news services accompany police and soldiers as the search for Phra Dhammajayo resumes inside the grounds of Wat Phra Dhammajaya on Friday morning.(Photo by Pattanapong Hirunard)

PATHUM THANI - Police supported by soldiers on Friday resumed their search for Phra Dhammajayo in three areas inside the sprawling grounds of Wat Phra Dhammakaya.

Department of Special Investigation chief Paisit Wongmuang announced that Wat Phra Dhammakaya had allowed a resumption of the search in zones A and B and the six-storey medical care building, Boon Raksa. Agreement was reached at talks mediated by Pathum Thani chief monk Phra Thep Rattanasuthee.

The Boon Raksa building was searched prebiously, in mid-February, but there was no sign of Phra Dhammajayo. At the time, officers wondered if he was even still inside the temple.

On Thursday, the DSI tried to enter gate 4 of the Pathum Thani temple, but were brought up short by defiant monks and disciples, who set up barricades to obstruct the search of zones A and B and the medical building.

Representatives of the National Office of Buddhism, the Human Rights Commission and reporters from selected news services were allowed to witness the search on Friday.

The search for Phra Dhammajayo, the 72-year-old founder of the Dhammakaya sect wanted on money laundering, receiving stolen assets and forest encroachment charges, began on Feb 16.

Prime Minister Prayut Chan-o-cha used the all-powerful Section 44 of the interim charter to declare the 2,300 rai of Wat Phra Dhammakaya, and nearby areas, a "specially controlled area" for "effective law enforcement" in an order published in the Royal Gazette. 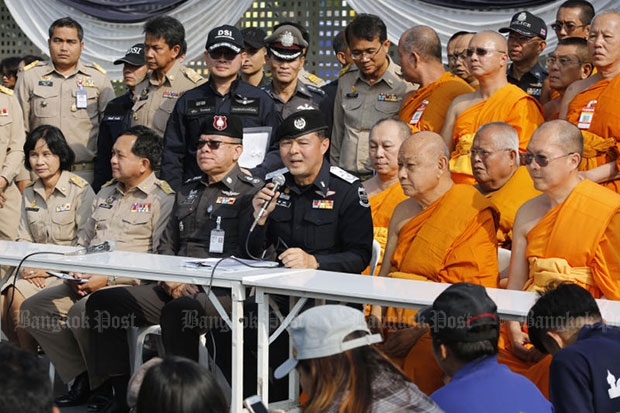 Department of Special Investigation chief Paisit Wongmuang (centre) announces the resumption of the search of Wat Phra Dhammakaya  in zones A and B and the Boon Raksa building in Pathum Thani on Friday, after talks mediated by Pathum Thani chief monk Phra Thep Rattanasuthee, (second from right).  (Photo by Pattanapong Hirunard)