Flames spread quickly to a shop at Walking Street in Pattaya beach city on Wednesday morning after a transformer in front of a shophouse exploded. The fire spread to nearby shophouses before being put under control shortly later. (Photo by Chaiyot Pupattanapong)

CHON BURI- A transformer exploded on the popular Walking Street in Pattaya beach city on Wednesday morning, shooting flames that ravaged three shophouses nearby. No casualties were reported.

Ten fire trucks and a crew of firemen were deployed to the shopping street, where the power transformer exploded in front of Rock Street shop in Pattaya downtown, said police. The explosion was reported at around 7.30am. 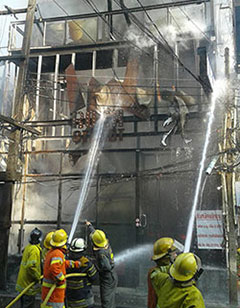 Firemen put out a fire following a transformer explosion in front of a shop at Pattaya Walking Street in Chon Buri province on Wednesday morning. (Photo by Chaiyot Pupattanapong)

The shop was engulfed in flames, which spread quickly to nearby shophouses. Firefighters took about 30 minutes to bring the blaze under control. Three shophouses were destroyed.

Somparn Rattanasaeng, 50, a housekeeper at the shop, told police the shop was closed at the time of the explosion. When she went to the shop on Wednesday morning to clean it as usual, there were no employees there.

While working inside, she heard an explosion in front of the shop, prompting her to come out to check. She found the transformer installed at the electric pole in front of the shop exploded and caught fire. She then ran away for her own safety and firemen arrived shortly after.

Pol Maj Gen Anant Charoenchasri, mayor of Pattaya municipality, led a team of officials to inspect the scene. Damage could not be estimated for the time being as the three shophouses and all assets inside were destroyed.

The mayor ordered a probe into the incident.