SI SA KET - Two young boys left their parents with a large bill when they broke into and ransacked a classroom at a primary school in Phayu district "just for fun", causing more than 60,000 baht in damage. 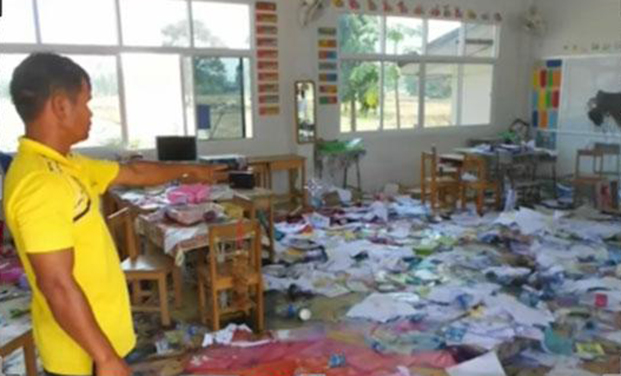 A teacher points at damage caused to a classroom at Ban Mung Nongtae School in tambon Phayu in Si Sa Ket by two boys.(Photo grabbed from TV Channel 3)

They made a huge mess of the classroom for Prathom 6 students in a single-story building at Ban Mung Nongtae School in tambon Phayu.

Teaching materials, a computer, a television and other equipment was destroyed and books torn to pieces and scattered about.

White boards were coloured in black and cartons of school milk opened and spilled over the floor, which was also left soaked with water colours, said Pol Capt Kittithat Chanthasen, duty-officer at Phayu police station.

Police were informed of the destruction on Wednesday.

The deputy director of the school, Ms Supin Sing-ngern, said there was no one there when the break-in occurred.  Teachers and other staff were away on a study trip and the school is closed for the end of semester holiday.

They were greeted with the destruction when they returned, Thai media reported.

Police investigators learned the vandals were two brothers, aged 8 and 9, who were Prathom 3 and 4 pupils at another school in Muang district.

Police took the boys in for questioning on Wednesday. The youngsters confessed to having ransacked the classroom, and explained that it was just for fun, not any ulterior purpose.

The school estimated the damage caused to the classroom at 62,692 baht and asked the boys’ parents to pay.

This left the parents, both construction workers, in tears. They said they could not find such a large sum of money to pay for the damage caused by their sons.

The school director later assigned his deputy to meet the parents and the boys and they agreed on a reduced damages payment of 40,000 baht. The parents promised to pay in monthly instalments.  The school was satisfied and agreed not to take action against the boys, said the police chief.