Educators have called on the government to pay more attention to research as only 10 Thai universities made it on the Times Higher Education top 300 Asia University Rankings this year, and six out of the universities' rankings slipped from last year.

Mahidol University tops Thai universities at 97th place, followed by King Mongkut's University of Technology Thonburi which ranked between 101-110th place, and Chulalongkorn University at between 151-160th place, according to results released on Wednesday.

The top 10 universities in Asia are in Singapore, mainland China, Hong Kong, Japan and South Korea. 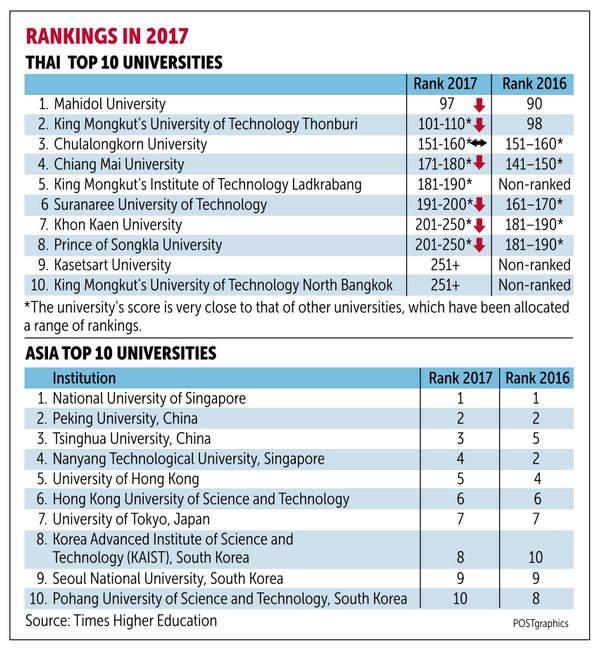 "The chances of Thailand being home to even one of the continent's top 100 universities in the near future are also under threat," Times Higher Education wrote in the report, adding that Thai universities face increasing competition from other leading Asian universities that are improving at a faster rate.

Sompong Jitradap, a professor of education at Chulalongkorn University, yesterday said the government is not paying enough attention to allocating more money to research development in the country, saying each year the NRC is allotted 0.3-0.4% of the country's GDP to support research, while key research agencies of some countries such as Singapore and South Korea obtain about 4% of GDP.

The government still lack a clear direction in developing students so they get good grades in sciences and mathematics, he said, adding that most Thai research conducted in past years did not meet universal research trends and the country's requirements.

While such rankings might not be the only way to judge a university, Thailand needs to look carefully and make it clear in which direction it wants to go, he said.

Singapore and Hong Kong promote themselves as education hubs and give priority to international university rankings, he said.

They set the rankings and criteria used in these surveys as key performance indices and provide incentives for their educational personnel.

Having a lot of universities securing good places in university rankings helps attract investors who also consider the potential of the workforce in a particular country, he added.

"[Transnational] investors will consider whether they can recruit good personnel within the country or have to recruit from other countries," he said.

"The Thai government has to look and decide if this is the way to go if it wants to boost Thai university rankings."