Orm Sin under emergency care and close monitoring after the second operation on Saturday. The ailing sea turtle died on Tuesday morning, despite the best efforts of the veterinary team.(Photo by Wichan Charoenkiatpakul)

Orm Sin the coin-swallowing sea turtle died on Tuesday morning after lapsing into a coma following a second operation to repair its tangled insides. 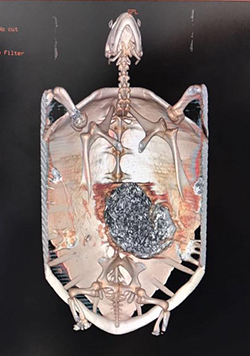 A CAT scan shows what was thought to be a tumour is actually an accumulation ofalmost a thousand coins.

The veterinary team at Chulalongkorn University decided additional surgery was needed to resolve complications after more than 900 coins were removed from its stomach in a nine-hour operation two weeks ago.

The faculty of veterinary science announced on Tuesday afternoon that the surgery was unsuccessful and the 25-year-old sea turtle, affectionately nicknamed Orm Sin (money bank), had died around 10.10am.

On March 6, the team removed 915 coins weighing a total of 5kg from the stomach of the suffering female turtle, which had swallowed coins thrown into its pond by people seeking good fortune.

After the operation, the turtle's condition showed improvement and it could eat and swim.

However, veterinarians on Saturday decided on further urgent surgry after the turtle's condition deteriorated due to high levels of nickel in its body, absorbed from the coins.

The turtle had 200 times more than the usual amount of nickel in its blood, resulting in lowered immunity which affected its heart and muscles.

The turtle's intestines were also tangled. Its intestinal muscles were unable to recover due to loss of protein. This led to a buildup of toxins in its blood, vet Nantarika Chansue, director of Aquatic Animal Research Centre, said.

The team released a large amount of gas and fluid from its stomach and rearrange its intestines into the  right position. The turtle did not recover consciousness, showing only weak signs of life and needed oxygen and close monitoring.

All efforts were in vain. Vet Nantarika cried when she made the announcement at a media briefing.

She said the Orm Sin case had provided an essential lesson for them. A post-mortem examination would be performed for educational purposes.

Later, the Sea Turtle Conservation Centre in Rayong will preserve and stuff its carcass, also for educational use.

"I want the case of Orm Sin to be an example for people in general who may wrongly believe that throwing coins into ponds where there are live animals brings good fortune. It only hurts the animals," vet Nantarika said. 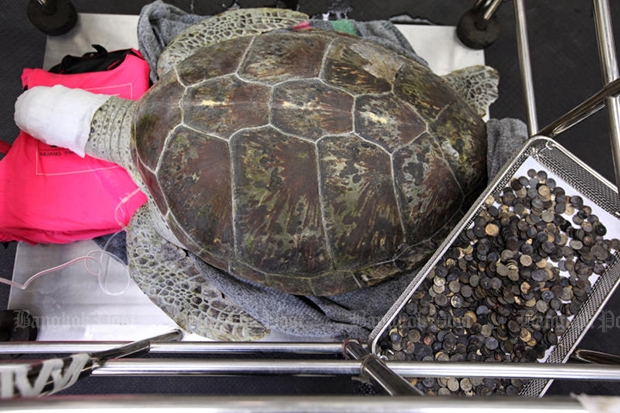 Orm Sin after the first operation, with the coins taken from her stomach. (Bangkok Post file photo)