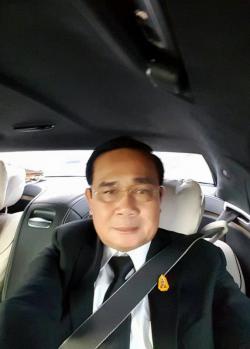 Prime Minister Prayut Chan-o-cha takes a selfie as he buckles up in a car and drives home the message of road safety.

Once the new rules come into effect, violators could face fines of between 500-50,000 baht for not wearing a seat belt, among other things, according to Department of Land Transport (DLT) director-general Sanith Phromwong.

Violators in private cars will be fined 500 baht.

The fines, of up to 50,000 baht, will be higher for drivers and passengers of public vehicles.

If fined by police, according to the Land Traffic Act, the maximum fine for a violator will be 1,000 baht. But if found by a DLT official, a driver or a passenger who fails to fasten their seat belt will be forced to pay up to 5,000 baht.

The vehicle owner and service operator must also share responsibility and could be fined up to 50,000 baht, Mr Sanith said.

The government intends to kick off the enforcement of the new rules before the Songkran traditional New Year in the middle of next month.

Lt Gen Sansern said the government is taking the ongoing 15-day period, which began on Tuesday, to publicise the rules.

In line with the new safety measures, no passenger is allowed to ride in the luggage tray of a pickup truck while travelling.

Therefore, he hopes not to see people travelling in or throwing water at others from the trays of pickup trucks on the road during Songkran this year, Lt Gen Sansern said.

Prime Minister Prayut Chan-o-cha yesterday shared a selfie of him wearing a belt in the back seat of his car to promote the government's fresh attempt to curb road accidents.

"I took the photo myself," he told members of the media yesterday who asked him to talk about his latest traffic order issued under the powerful Section 44 of the interim charter to punish drivers and passengers who ignore safety travel rules.

Gen Prayut elaborated on his reasons for executing the order after it was announced in the Royal Gazette on Mar 21.

He insisted the order is necessary and the government cannot further avoid enforcing strict laws, following calls for it to reduce road accidents which usually skyrocket during long holidays.

The order states a set of traffic rules to strengthen police and transport officials' efforts to ensure people drive and ride in vehicles in line with laws. Transport officials can reject processing of annual car tax payments if drivers fail to pay traffic tickets.

A van can accept only up to 13 passengers. But the most surprising new rule is the seat belt requirement for passengers in back seats, which are practically never worn among Thais.

All people aboard cars registered since April 1, 2012, taxis, passenger vans and inter-provincial passenger buses will be required to fasten their seat belts.