The results of the nationwide O-Net tests for students in the 9th grade, or Mathayom 3, for the 2016 academic year which came out on Saturday showed students failed all five subjects on average, according to the National Institute of Educational Testing Service (Niets). 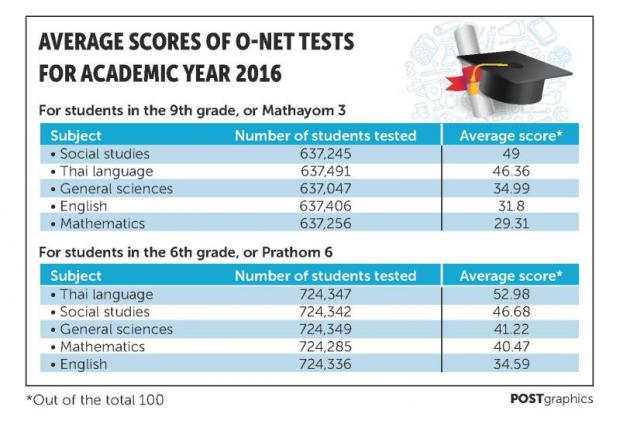 Meanwhile, the results of O-Net tests for students in the 6th grade, or Prathom 6, released on Friday showed students failed four out of the five subjects on average with only the subject of Thai language having an average score of 52.98%.

Education permanent secretary Chaipreuk Sereerak told the Bangkok Post on Saturday that the O-Net results for the 6th and the 9th graders did not fluctuate much over the past few years.

The average scores under 50% did not mean the quality of students had dropped. However, it was undeniable that the gap between schools in Bangkok and the provinces as well as the gap between large and small schools remained a concern.

The curriculum and the test methods will be developed to better reflect students' real competency, he said.

Overall, average scores for over 637,000 Mathayom 3 students tested nationwide this year in all the five subjects were under 50%, with mathematics and English remaining students' least favourite subjects with average scores of 29.31% and 31.8%, respectively, Niets said.

Junior high school students did best in social studies with 49% on average. They earned 46.36% and 34.99% for Thai language and general sciences, respectively, according to the results.

Only the result for Thai language improved from the previous year, Niets said.