Several northeastern provinces were hit by heavy downpours on Sunday and weather authorities have warned of more summer storms in several other parts of the country until Wednesday.

Strong winds and heavy rains flooded some roads in Khon Kaen municipality on Sunday morning and some districts in Udon Thani, including the city, were battered by downpours for hours. 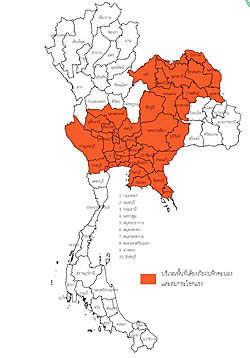 Areas at risk of summer storms and strong winds as of Sunday. (Meteorological Department photo)

Heavy rains were reported in other areas, including Maha Sarakham, Loei and Sakhon Nakhon.

The Disaster Prevention and Mitigation Department on Sunday reported damage to 74 houses in 50 villages in Phetchabun and Ubon Ratchathani due to summer storms on Saturday.

The latest announcement issued by the Meteorological Department on Sunday warned of summer storms in almost every province in the northeastern region and parts of the northern and central region and all eastern provinces until Wednesday.

People are advised to stay away from outdoor places due to the "severe weather conditions", it added.

Thailand abstained on a vote to adopt the UN resolution on the situation in Myanmar as the resolution did not take into account several essential factors, the Foreign Ministry says. spokesman.