NAKHON RATCHASIMA - A Scottish Muay Thai boxer was found dead on Sunday in a heavy sweatsuit that police speculate might have brought on a heat stroke.

Pol Capt Prachakorn Promduang of Pho Klang police station said the boxer was found dead in Muang district one day after he went left his hotel and failed to return.

The boxer, known by his ring name of Jordan Lamnammoon Muay Thai, was wearing a thick outfit when he left the hotel, and it was still in place when his body was discovered.

Trainer Kritchai Kritnok told police that the Scot went out with the heavy clothing to try to shred three kilogrammes so that he could meet the 61-kg limit for a bout on Sunday.

A resort owner told police that the man left at 11.30am on Saturday, according to Channel 3.

Doctors at Maharat Nakhon Ratchasima Hospital, who conducted a preliminary autopsy on the boxer, believed that he suffered a shock to his system due to severe dehydration from jogging in the scorching sun.

A detailed autopsy will be carried out to determine the official cause of death, Pol Capt Prachakorn said. (continues below) 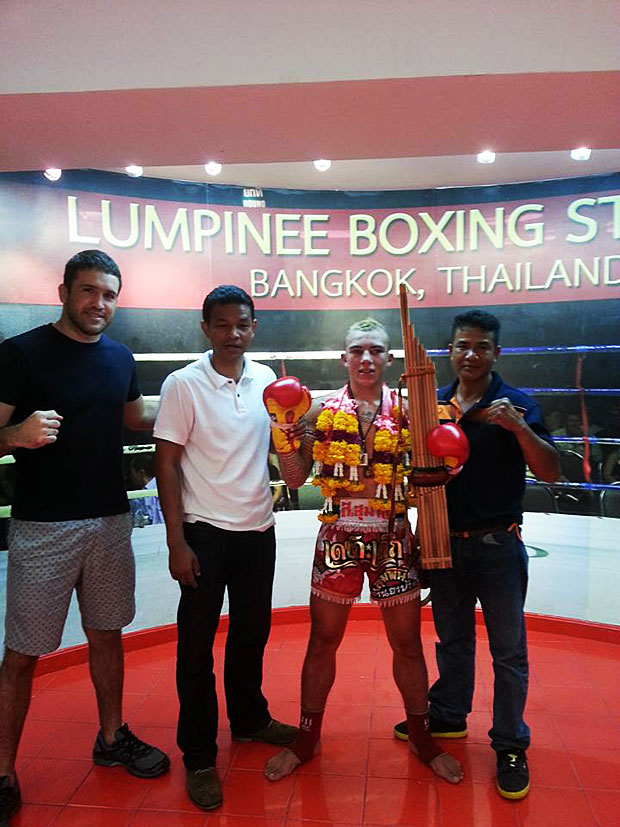 Jordan Lamnammoon poses for a picture after a win over Alaverdi Windy Sports on Feb 16, 2016. (Photo from Lamnammon Sor Sumalee Facebook account)

Jordan was scheduled to fight Khon Bola, a Cambodian boxer, at a temporary boxing venue at Wat Pong Din Sor in Muang district on Sunday night in the Sa-ngam Asean fight.

"Fighting this Sunday on Sa-ngam ASEAN promotion in Korat," he wrote on his Facebook account from Ubon Ratchathani on Thursday.

"Loving the constant fighting each month. Almost 3 years living in Thailand and with each year, I always learn more and more. Thank you to my team, family, friends and fans for always helping me on my journey," he wrote.

The Lamnamnoon Sor Sumalee Gym is in Ubon Ratchathani.

Jordan gained a reputation as "the dancing boxer" as he always danced in the traditional northeastern style and played the kaen before starting a bout, according to camp owner Kukrit Kamolrit.

The kaen is a woodwind instrument which is a trademark of Northeastern-style music.

Mr Kukrit told police that the boxer had been in more than 70 fights, 15 of them since last year when he switched camps to train with Lamnamnoon Sor Sumalee.