Former Tourism Authority of Thailand (TAT) governor Juthamas Siriwan (in mask) and daughter Jittisopha are escorted to a cell at the Central Women’s Correctional Institution after the Criminal Court session on Wednesday that also denied bail and passed the request to the Appeal Court. (Photo by Patipat Janthong)

Former Tourism Authority of Thailand (TAT) governor Juthamas Siriwan and her daughter, Jittisopha, were handed respective prison sentences of 66 years and 44 years Wednesday for bribery over the hosting of the Bangkok International Film Festival in previous years.

They were put behind bars Wednesday evening while the Appeal Court decides on their bail request.

The Central Criminal Court for Corruption and Misconduct Cases also ruled to confiscate the equivalent of 62.7 million baht in cash from the overseas bank account of Ms Jittisopha, who is 43.

Although her age makes the matter mostly academic, the former governor can only spend a maximum of 50 years in prison for her crimes, according to the Criminal Code.

The lawsuit filed by the OAG charged Ms Juthamas with demanding a bribe from Gerald Green and his wife Patricia, an American couple, in exchange for them being awarded a 60-million-baht contract to organise the annual Bangkok International Film Festival between 2002 and 2007.

Ms Jittisopha helped her mother to commit the offences by opening accounts in numerous foreign banks, and the American couple transferred US$1.8 million into these accounts, the court found.

The judge was convinced by the evidence presented and witness hearings that the American couple were granted the sole rights to run the event despite lacking the necessary expertise, experience, or any related proven work record, according to reports.

No other organiser attended the competition for the contract, which the court decided was an attempt to bar other potential competitors from taking part, the ruling said.

As a result, the film festival rights were secured by three companies, all of which were created by the couple to receive the contract from the TAT on Ms Juthamas' advice, the court found. 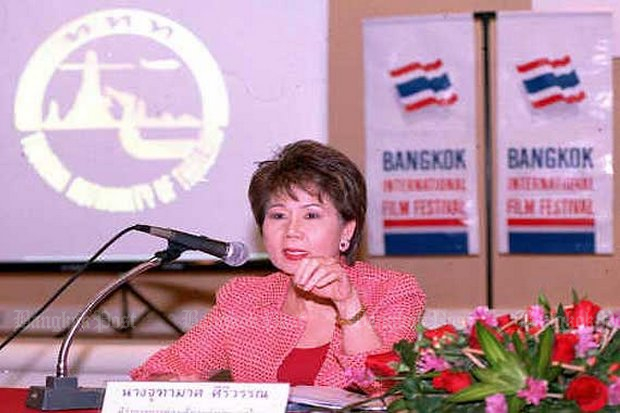 Flashback, 2004: Ms Juthamas, head of the Tourism Authority of Thailand, briefs reporters on the Bangkok Film Festival - which she had already sold to the Greens. (Bangkok Post file photo)

This was considered an act of malfeasance which is a form of misconduct that falls under Section 12 of the 1999 act on bidding for projects run by a state organisation, also known as the anti-price collusion law, the ruling said.

The judge also found Ms Juthamas guilty of demanding bribes worth over US$1.82 million from the Greens, with the money paid via 59 money transfers to the accounts of Ms Jittisopha and a friend.

Ms Juthamas' arguments that she had never abused her position as TAT governor, and had never been involved in handling the film festival contracts, were not convincing, the court said.

Similarly, Ms Jittisopha's claims that the US$1.82 million transferred to her bank account was earned from her personal business dealings with Gerald Green and a company called Consultasia Co did not stand up in court, according to the ruling.

The court ordered the confiscation of all the money plus interest.

Ms Juthamas and Ms Jittisopha both appeared in court dressed in black Wednesday and sighed repeatedly as the ruling was read out, according to eyewitnesses. The ruling at the Criminal Court on Ratchadaphisek Road took about three hours.

After the sentence was read out, their lawyer Thanakorn Waekwaree filed a request for bail along with surety of one million baht cash for each of his clients.

Nikorn Tassaro, Deputy Chief Justice of the Central Criminal Court for Corruption and Misconduct Cases, said the bail application will be forwarded to the Appeal Court for consideration because of the serious nature of the offences and the length of the sentences.

This makes the two ladies a potential flight risk, he said.

Mr Thanakorn said he was waiting for the Appeal Court's decision on the bail request for his two clients.

An informed source said a decision by the Appeal Court is likely within the next three to four days.

The Greens were sentenced to six months in jail and six months of home detention for their part in paying bribes to secure the rights to run the festival.

The pair were found guilty of money-laundering and violating the Foreign Corrupt Practices Act.

The US Justice Department said there was credible evidence the Greens had paid $1.8 million in bribes to Ms Juthamas in exchange for the contracts to run the festival and other TAT projects.

KANCHANABURI: Ninety-five Myanmar migrants were arrested by Thai authorities after they illegally crossed the border into this western border province on Wednesday morning.

A Singapore Airlines Ltd flight en-route from San Francisco was escorted by fighter jets after a passenger allegedly claimed there was a bomb in his carry-on bag and assaulted the crew, according to the police.