Vorayudh 'Boss' Yoovidhaya reportedly enjoys partying in Europe, Japan and around Thailand, and never has faced charges over the September, 2012, death of a policeman. (Bangkok Post file photo)

Prosecutors will decide Thursday whether to indict Red Bull heir Vorayudh "Boss" Yoovidhya for his alleged role in a hit-and-run incident which killed a Thong Lor policeman five years ago.

Achawin Boonthamcharoen, a deputy superintendent for investigation at Thong Lor station, said Wednesday that Mr Vorayudh, 31, is scheduled to meet prosecutors Thursday to hear whether he will be prosecuted over the case, adding he can authorise his lawyer to represent him. 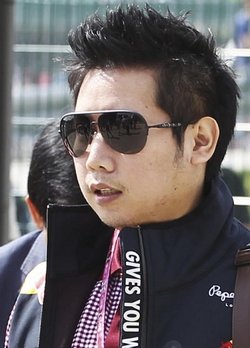 Vorayudh: Living the hi-so life since 2012 in Europe, Japan and around Thailand.

Pol Lt Col Achawin said if Mr Vorayudh later fails to meet authorities to stand trial if prosecutors indict him, a warrant for his arrest will be issued.

The officer, however, said the case would be closed if prosecutors decide not to indict the suspect, insisting police have investigated all aspects of the case.

An Associated Press report has found Mr Vorayudh has kept up his travels and luxury lifestyle at home and abroad since the probe began, while managing to avoid meeting police and prosecutors. Police say he was not banned from travelling abroad and there is no arrest warrant out for him. He was earlier released as authorities were unable to specify when he would be indicted, Pol Lt Col Achawin said.

Mr Vorayudh has repeatedly failed to report to police and prosecutors to acknowledge the charges, citing illness and business overseas.

His lawyers have also petitioned prosecutors several times seeking fairness in the case, dragging out the process for almost five years.

Pol Lt Col Achawin said the statute of limitations on his charges of failing to help a crash victim and leaving a crash scene will expire later this year.