Office of the Attorney-General (OAG) deputy spokesman Prayuth Phetkhun said prosecutors earlier summoned the suspect to report to them Thursday. But Mr Vorayuth's lawyer sent a letter to the prosecutors on his behalf, saying he was busy in the United Kingdom, so the director-general of the Department of Southern Bangkok Civil Litigation permitted him to report on April 27 instead, Mr Prayuth said.

"I confirm the OAG has always followed up on and expedited this case," said Mr Prayuth, adding the prosecutors have decided to indict the suspect on charges of reckless driving causing death with a 15-year statute of limitations, expiring on Sept 3, 2027, and failing to help a crash victim, the five-year statute of limitations for which will expire on Sept 3 this year.

Two other charges have been dropped as their one-year statute of limitations has expired. They are speeding and reckless driving causing damage to others' property.

Mr Prayuth said although the statute of limitations for the speeding charge has expired, the matter could be explained to the court for it to determine whether the suspect drove carelessly.

The deputy spokesman insisted Mr Vorayuth can no longer claim the same reason in asking for further postponements. If he does, prosecutors will inform police to issue a warrant for his arrest.

He said the indictment of Mr Vorayuth has failed to take place because the suspect cited several reasons for deferrals, including submitting letters to seek justice along with claims he was not speeding. 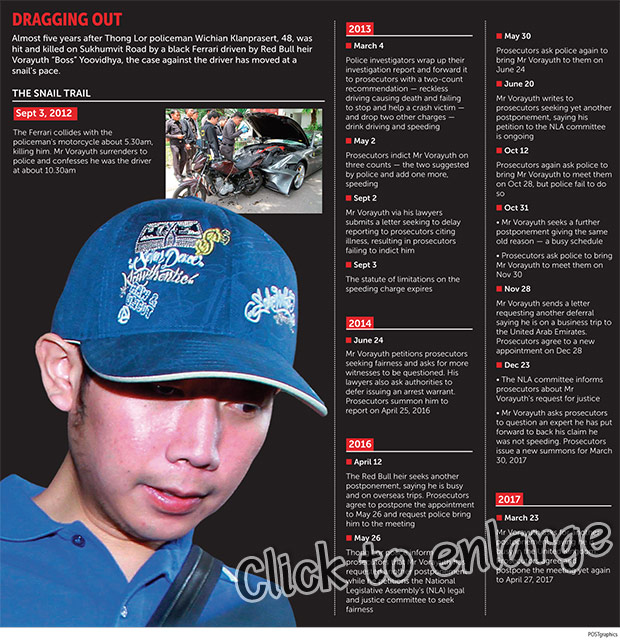 Asked whether the judicial process against the suspect has moved too slowly, Mr Prayuth said the delays occurred because Mr Vorayuth petitioned for fairness.

Some of the suspect's petitions were probed by prosecutors, he said, adding if prosecutors had ignored them, they would have been accused of being negligent.

Mr Vorayuth is accused of slamming his speeding black Ferrari into the motorcycle of Pol Sgt Maj Wichian Klanprasert of Thong Lor station while on Sukhumvit Road early on the morning of Sept 3, 2012.

Criticism has flared over the handling of Mr Vorayuth's case by officers as he has not yet been indicted in court.

An Associated Press report found Mr Vorayuth has kept up his travels and luxury lifestyle at home and abroad since the probe began, while managing to avoid meeting police and prosecutors. Police say he was not banned from travelling abroad and there is no arrest warrant out for him.

As for the OAG's handling of the case, Mr Prayuth said Seksan Bangsombun, a former director-general of the Department of Southern Bangkok Civil Litigation, earlier decided to indict Mr Vorayuth.

Mr Vorayuth was ordered to meet prosecutors to be indicted on April 25, 2016, but failed to show up. This was followed by petitions seeking fairness and claims he was busy overseas, Mr Prayuth said.

One petition was filed at the National Legislative Assembly's (NLA) committee on legal, justice process and police affairs, asking for the questioning of more expert witnesses about the speeding issue.

Asked why prosecutors never asked police to issue a warrant for his arrest, Mr Prayuth said Mr Vorayuth had cited valid reasons for not turning up, while his petitions for justice were time consuming.

"Now the probe has been completed. And if he still fails to turn up, prosecutors will ask police to seek a warrant for his arrest," said Mr Prayuth. If a warrant is issued, arrangements can be made to extradite the suspect to Thailand and the OAG has the International Affairs Department to take care of the matter, he added.